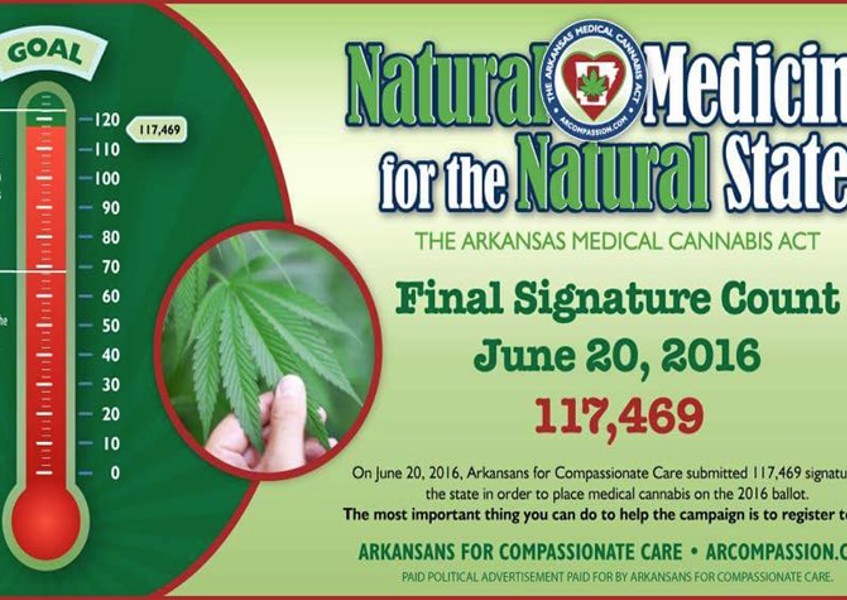 Voters in Arkansas are likely to be presented with a proposed ballot measure to legalize medical marijuana in the state this November, supporters say.

On Monday, Arkansans for Compassionate Care, the organization behind the proposal, submitted 117,469 raw signatures to state election officials for verification. At least 67,877 of those signatures need to be deemed valid in order to qualify for the November ballot. The Arkansas Secretary of State now has 30 days to review and validate the signatures.

We are confident that we will qualify for the ballot and give Arkansans the opportunity to allow sick and dying patients safe and legal access to medical cannabis when their doctor agrees that its the best treatment option for them. Ryan Denham of Arkansans for Compassionate Care

Melissa Fults, campaign director for Arkansans for Compassionate Care, told the Times Record that they have verified at least 85,000 of the signatures on their own, and are confident the measure will qualify for the ballot.

We are confident that we will qualify for the ballot and give Arkansans the opportunity to allow sick and dying patients safe and legal access to medical cannabis when their doctor agrees that its the best treatment option for them, said Ryan Denham, Deputy Director of Arkansans for Compassionate Care.

The Most Comprehensive Medical Marijuana Program in the South

If the measure qualifies for the ballot and is subsequently approved by voters, Arkansas would become home to the most comprehensive medical marijuana program in the south. In addition to a vast list of qualifying conditions, the measure includes a hardship provision.

This provision will allow some patients the ability to grow their own cannabis, as well as incorporating a sliding payment scale to allow low and limited income patients the ability to afford their medicine. The proposed medical marijuana program would be overseen by the the Arkansas Department of Health (ADH), with administration of the program self-funded by moderate taxes placed on medical marijuana sales.

Initially, up to 38 individual medical marijuana dispensaries [known as care centers] would be authorized across the state.

Initially, up to 38 individual medical marijuana dispensaries, known as cannabis care centers in the proposal, would be authorized across the state. The ADH would have the authority to increase the number of cannabis care centers to ensure adequate coverage statewide, and cities and counties would be given the ability to restrict where they may be located.

Under a hardship cultivation clause contained in the proposal, patients who live more than 20 miles away from a cannabis care center, and meet certain eligibility requirements, would be eligible to apply for a home cultivation licence. The hardship cultivation would allow authorized patients to grow up to five mature cannabis plants and five seedlings in an enclosed, locked area. Home grows would need to be registered and inspected by the ADH.

Who Would Qualify for Medical Marijuana in Arkansas?

The full list of specific qualifying medical conditions for the proposed statute are: