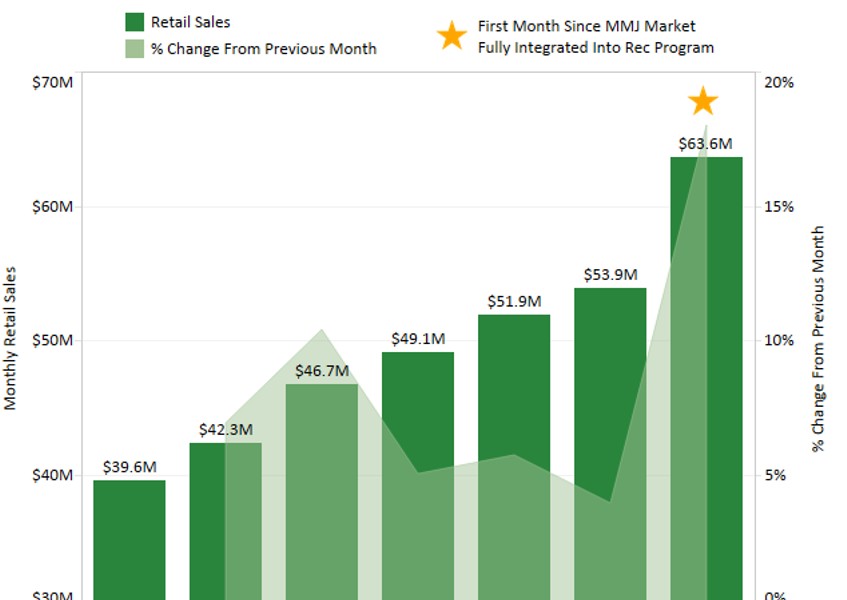 The merger of Washington States unregulated medical marijuana industry into its recreational cannabis program has led to a huge spike in monthly sales for licensed retailers, indicating that the complicated transition is playing out as hoped.

In July, cannabis retailers posted an 18% spike in sales from the previous month, a new record for the regulated market. The $63.6 million in sales marked an increase of more than $10 million over the total in June.

The sizable gain comes on the heels of a July 1 deadline for all remaining unlicensed dispensaries that had not won permits under the rec program to close.

After legalizing adult-use cannabis in 2012, Washington decided to fold its unregulated medical marijuana market into the rec framework.

The plan involved boosting the number of recreational retail licenses to give a fair share of existing dispensaries a chance to win permits, allowing them to either operate solely as adult-use stores or obtain a medical marijuana endorsement. The endorsement allows them to sell to registered medical marijuana patients, who must pay the 37% excise tax assessed on marijuana transactions but arent subject to the 9.6% state sales tax that recreational customers must also pay.

At one point early this year, Washington was home to an estimated 800-1,200 unregulated and unlicensed dispensaries serving a patient base estimated at between 100,000 and 125,000.

There are currently 413 licensed retail stores in the state, 362 of which have received a medical endorsement.

This change has fundamentally altered the states retail landscape, forcing hundreds of dispensaries out of business and shaking up how patients get their medicine but also bringing the MMJ industry into a regulated system. Judging by Julys historically high sales figures, it seems many of these patients have moved to a rec store either with or without a medical endorsement.

To receive a medical endorsement, retailers are required to have at least one certified medical marijuana consultant on-staff a process that requires an employee to take and pass a Department of Health-approved training course as well as a dedicated portion of the store where they can issue medical cards to patients.

This has left some dispensaries wondering whether its advantageous to jump through the hurdles necessary to receive a medical endorsement, and patients deciding if a 9.6% savings is worth putting their name in a state-run database.

Chad Champagne, owner of 420 Carpenter in Lacey and 420 West in Olympia, saw a collective 26% jump in sales from June to July, and he expects growth to increase going forward.

He believes medical clientele who are choosing to purchase from the recreational market are driving the increase in sales, due to his stores aggressive pricing model ...