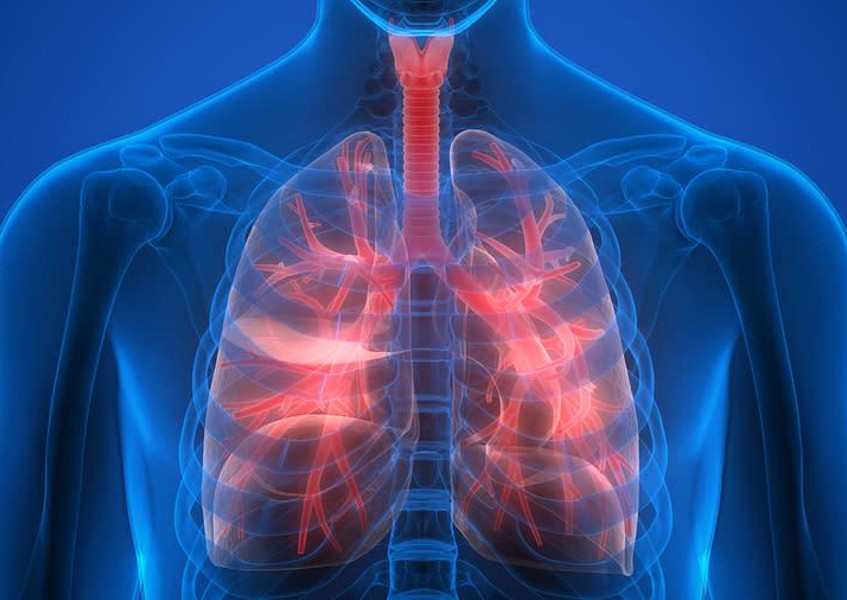 Smoking anything will damage your lungs. It means inhaling something other than oxygen when the human anatomy would prefer not. The question may be “how much does cannabis cause lung disease?”

The lungs are a phenomenal anatomical fact. Often thought of as two balloons that inflate and deflate with breathing. Your gross anatomy book will tell you, “The main function of the lungs is to perform the exchange of oxygen and carbon dioxide with air from the atmosphere. To this end, the lungs exchange respiratory gases across a very large epithelial surface area—about 70 square meters—that is highly permeable to gases.”

Anything that interferes with that process does some harm. It could be air pollution, pollen, cold or hot air, asbestos, coal dust, silicates, fertilizers, and many more elements assault your respiration throughout every day.

Pharmaceutical manufacturer Merck claims, “The average person who is moderately active during the daytime breathes about 20,000 liters (more than 5,000 gallons) of air every 24 hours. Inevitably, this air (which would weigh more than 20 kilograms [44 pounds]) contains potentially harmful particles and gases. Particles, such as dust and soot, mold, fungi, bacteria, and viruses deposit on airway and alveolar surfaces.” And, only the hairs in your nose and the mucus that coats the airways protect you.

What’s to worry about?

Other research published in the Annals of the American Thoracic Society (2013) concluded, “Regular smoking of marijuana by itself causes visible and microscopic injury to the large airways that is consistently associated with an increased likelihood of symptoms of chronic bronchitis that subside after cessation of use. On the other hand, habitual use of marijuana alone does not appear to lead to significant abnormalities in lung function.

And, a report from the British Lung Foundation (2012) claims there is a link between smoking marijuana and the frequency of chronic coughing, sputum production, and wheezing. It also notes, “a lack of conclusive evidence on how smoking just cannabis (i.e., without tobacco) affects lung function and the development of chronic obstructive pulmonary disease (COPD).

What to hope for?

We can cherry-pick evidence for one side of the argument or the other, but when it comes to connecting cannabis with lung cancer, we look again at the British Lung Foundation that acknowledges, “studies in human populations have yielded conflicting evidence on the subject: some suggest there is a link between smoking cannabis and lung cancer while others don’t.”

Cannabis can irritate the lungs. And, irritation is one early warning system that something is wrong. If you are smoking joints, you are inhaling some of the same carcinogens as you do when smoking tobacco especially if you are mixing weed with tobacco.

For light smokers, that explains the coughing, dry mouth, and phlegm. For some people, especially those with a genetic history pre-disposed to lung disease or working in otherwise hazardous environments, smoking marijuana may add to the risk.

The New England Medical Journal reports, “Inhaled pharmaceuticals are commonplace, but in the United States no vaporized inhalant is currently available as an alternative to medicinal marijuana, pending FDA approval of nabiximols, currently in phase 3 trials (ClinicalTrials.gov number, 01337089).”

The extensive study on Cardiac Risk Development in Young Adults reported, “The analyses showed pot didn't appear to harm lung function, but cigarettes did. Cigarette smokers' test scores worsened steadily during the study.” The study of thousands of young people over a 21-year period concluded marijuana smoking did not reduce the lungs’ ability to expand.

Another study published by American Cancer Research concludes, “The active ingredient in marijuana cuts tumor growth in common lung cancer in half and significantly reduces the ability of the cancer to spread, say researchers at Harvard University who tested the chemical in both lab and mouse studies.”

So, where does this leave you?

Smoking marijuana occasionally may irritate your respiratory system, but it is not likely to cause major damage. Regular use ups the risk, and heavy use pushed the envelope. But, you do have other options with cannabis. You can prefer edibles, vaping, or dabbing which do not have deliver the same smoker experience.

Combining a pot smoking habit with a cigarette smoking habit or heavy alcohol use is also asking for trouble, Smoking weed when you already suffer from lung problems, from asthma to COPD to cancer, is just stupid.

On the other hand, smoking pot lightly and occasionally will relieve the stress and depression attached to suffering pain. It can ease the nausea, appetite loss, and pain associated with chemotherapy. And, it may, over time, actually reduce cancerous tumor growth.

At the root of the question if smoking cannabis does cause lung cancer is found in each piece of research. That is, because the Unite States DEA continues to ban cannabis, the FDA is prevented from approving research advances. Moreover, with the DEA and FDA holding their positions, neither Big Pharma or university labs can secure the funding needed to move forward with the quality research necessary to discern some facts to work with.

What we are left with is largely research based on the performance of mice and tadpoles. Making human decisions based on those results lacks wisdom. So, things would suggest that moderation is the rule.