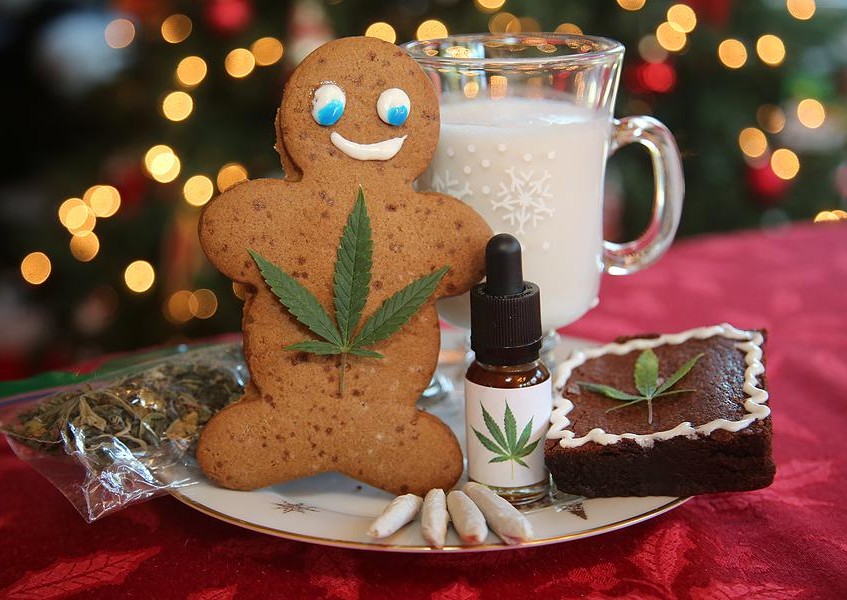 A love for weed broadens the mind in ways that go beyond the obvious. As more states legalize cultivation, for example, many who have never even grown a tomato plant are suddenly becoming enthusiastic amateur horticulturalists. The same applies in the kitchen. If your experience of cannabis edibles has so far been limited to gorging yourself on ready-made brownies, it’s time to unleash your inner Gordon Ramsay. Cooking with cannabis is far less complicated than you might think.

You’ll never make a good cake without the right type of flour. Similarly, there are some varieties of weed that are better than others for making edibles. It also depends on the sort of effect you are looking for. Broadly speaking, sativas provide a more euphoric effect, while indicas are a better choice if you want to chill out.

For a great all-rounder, Blue Dream is a popular hybrid that is sativa-dominant. Its high THC content gives a serious buzz that is followed by a relaxing after-effect. The blueberry tones make it a great choice for a range of edibles. It is readily available from any good online dispensary. Other strains worth considering are citrus flavors like Orange Crush and White Widow or the smooth and mellow tones of AK47 for an effect that is gentle but long-lasting.

Preparing weed as a culinary ingredient is a little different to rolling a joint, but the first step will be familiar – you need to grind your buds. The general rule here is the finer the better, and if you are going to be cooking with cannabis regularly, you could follow the example of cannabis chef and celebrity stoner Robyn Griggs Lawrence. She uses an old-fashioned manual coffee grinder that she keeps especially for the purpose.

Necessity is the mother of invention, however. If you don’t have a grinder, you can get by with a pestle and mortar or whatever innovative grinding solution you are accustomed to using.

The first step to preparing cannabis edibles is to make a smooth and potent cannabis oil by combining weed with oil or butter. Again, we can compare this with cake-making in that you have to get the ingredients in the correct ratios or you are doomed to fail. The rule of thumb here is one ounce of weed to each cup of oil, or to four sticks of butter. Don’t be afraid to make more than you need, as it is easier to prepare a cup or two, and you can always freeze anything you don’t use immediately.

If you struggle with cups and sticks, this handy online calculator could be your best friend, so keep the link somewhere convenient!

There are two common methods for making your cannabis oil – either in a saucepan on the hob or using a slow cooker. Most people choose the hob approach. The advantage to it is that it is far faster than a slow cooker. The flip side is you won’t get such a strong and rich result and there is greater potential for things to go wrong or your weed to burn. We will run through both methods:

Whichever method you use, you’ll need to strain off the oil once it is ready. You can just use a normal kitchen strainer, the sort you use for spaghetti, and line it with a layer of cheesecloth, which you can buy in any grocery store or online. Place the lined strainer over a large bowl, and gently pour. It will take a little while for all the liquid to pass through the cheesecloth. When it stops dripping, roll your cheesecloth up into a ball and squeeze it hard, you want to get every last drop of your precious cannabis oil!

Tempting though it might be to start chugging that cannabis oil and settle down to some serious couch lock, it is not recommended. This is actually the point in the proceedings when the fun can really start. The possibilities are almost limitless as to how to use your cannabis oil, and Robyn Griggs Lawrence has written the bible on the topic. But here are a few ideas to get you started:

Whichever you choose, you’ll be eager to dive in. Take care with portion control and remember that it can take up to an hour for the effects to kick in. Start with a small piece, for example if you make that banana bread, a thumb size portion is enough to begin with. You can always have more, but once you’ve eaten it, you’re committed!

Also, be aware that edibles create a different kind of high to smoking, one that is often stronger and that can last for as long as four hours. In other words, plan your day accordingly and make certain you can simply relax and enjoy. Most important of all, ensure you don’t need to drive anywhere.