What’s so strange about senior citizens smoking weed? It’s only weird if you think the younger generation discovered marijuana. Those over 70 were smoking it in the 1960s. Those in their 60s now were smoking during throughout the Vietnam Era. And, those in their 50s were smoking at rock concerts when concerts were a new thing.

Musicians, artists, and actors have been smoking for generations. Athletes, military veterans, and pain sufferers are finding relief in cannabis. And, every year high school students think they invented it and must keep it their secret.

The fact is that older Americans have been using for years. But, now that it is public and legalization is spreading, they are coming forward. In its report of data covering 2002 to 2014, the Centers for Disease Control (CDC) reported a 455% increase in usage among those 55 to 64 and 333% among those over 65. That’s substantially more than among those 18 to 25.

Now, this National Survey on Drug Use and Health (NSDUH) data is old already, and they basically asked a simple question: “Have you ever, even once, used marijuana or hashish?”

Why is this happening?

Perhaps more interesting is the research into why more elders smoke cannabis than ever before.

1. Longevity creates its own community. As people age, they naturally form tighter social connections with peers. Their survival brings some sense of entitlement to hold their own opinions, support their own causes, and advocate for common interests.

Finding themselves in the same boat defined by age and society. They live together, vacation together, and socialize together. Bingo, golf, and shuffleboard are far more interesting social and political events than youngsters know.

This is also the group defined by cancer, glaucoma, joint pain, nausea, neurologic diseases, neuropathic pain, and other ailments that connect them in common concerns. And, these are all problems addressed by cannabis strains.

Their data documents the decline of prescriptions for drugs like painkillers in the states where prescription and sale of medical marijuana are now legal. The Washington Post reported that the typical doctor in states where medical marijuana is permitted wrote 1,826 fewer dose of painkillers. That’s 265 fewer doses of antidepressants, 486 fewer anti-seizure medications, 562 fewer doses of ant-anxiety medications.

3. They’re Boomers, after all. Maybe it’s because they followed “The Greatest Generation,” but the Baby Boomers have been setting their own performance records over the years. They have used in the past, and will take advantage of any liberalization in the stars.

They went underground during their parenting years. But, now that the teens they thought were not smoking are out of the house, their returning to the pot. They found an exciting sub-rosa experience in weed and alcohol in their college years; it was more acceptable then than the cocaine and heroin that were just beginning to hit the suburbs.

Now, that they whole subject matter has made the common conversation and legal in an increasing number of states. Pew Research (2016) shows, “Young adults have importunately

driven the shift toward public support of the drug, though support is rising among other generations as well.” But, it also concludes. “A majority of Boomers (56%) also support legalization, up from just 17% in 1990.”

4. Cannabis is the better choice. For some seniors, medical marijuana and derivatives offer a usable and effective alternative to prescription pharmaceuticals. The LA Weekly reports the work of the Green Soldiers Healers Collective; “Foe elderly people, it’s all about making them feel comfortable.”

This is a small group in Los Angeles serving elderly patients with a whole range of geriatric problems. There patients and their caregivers worry about the side effects of opioids, the expense of some pharmaceuticals, and the real benefits of those prescriptions

Some patients have problems swallowing medications. Others can’t or won’t smoke. And, still others are suffering the after effects of opiates, chemotherapy, and complex medical problems.

But, cannabis is available in many applicable forms like edibles, beverages, tinctures, oils, and lotions. The Green Soldiers Healers Collective meets with groups of elderly people to explain what benefits cannabis offers. They explain the options, dosage, and administration of the various products and strains.

5. They know more than you do. Seniors enjoy the right to say anything they want without caring what others think. They feel they’ve earned it. And, the fact is they know their own bodies better than anyone else, including their doctors.

Unfortunately, geriatricians and others who treat seniors remain uniformed about marijuana and its benefits and risks. The Medicinal Cannabis Journal reports the following: 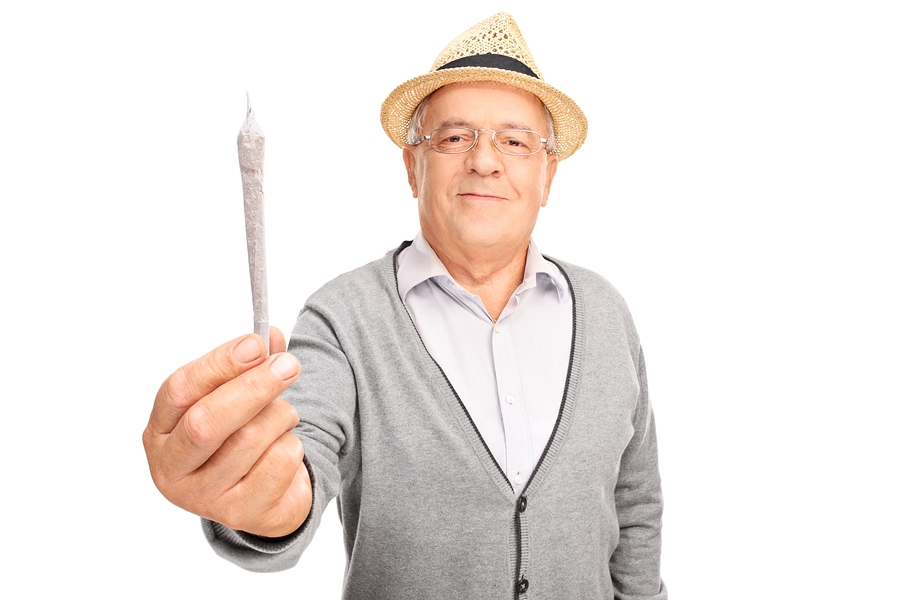 In 2016, JAMA Internal Medicine published a study by Marie J. Hays, Ph.D. and Mark S. Brown, MD. They concluded, “The rapid acceleration of prescription opioid–related overdose deaths in the United States is correlated with the availability of stronger opioid medications, as well as a change in medical practice from withholding opioid medication because of dependence risk to treating patients with chronic pain with opioids.”

As a result, there are significantly more deaths from opioids in states that do not permit sale of medical marijuana. Those states where it is legal are saving over hundreds of millions a year in Medicare prescription charges.

Why are more elders smoking cannabis than ever before? Seniors know their own bodies well. The deserve and want to live as comfortably as they can in the face of the physical and psychological challenges of aging. And, they see the clear good sense of finding that comfort in medical marijuana whether it is legal – or not.