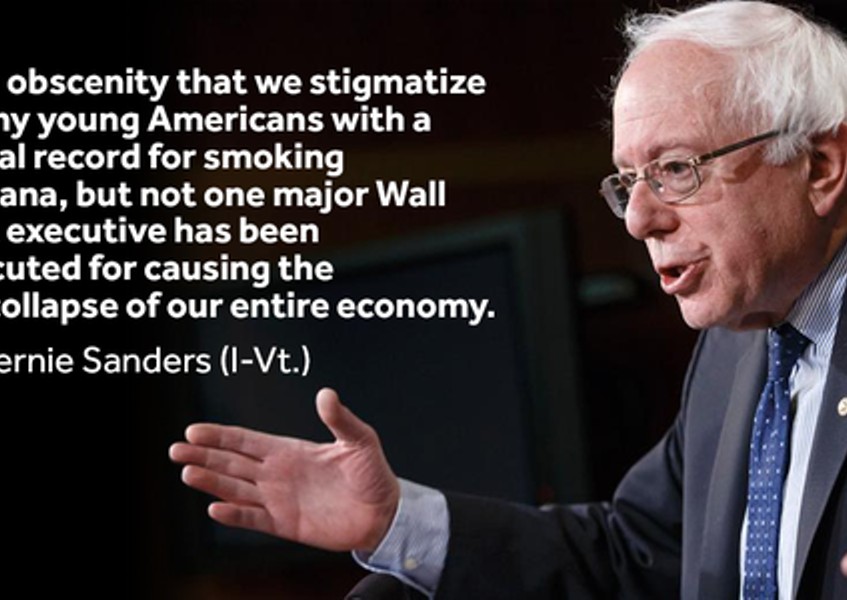 Sen. Bernie Sanders (I-Vt.) introduced a bill Wednesday that seeks to end federal prohibition of marijuana.  It is the first time a major party presidential candidate has endorsed the reform of marijuana laws.

“In the United States we have 2.2 million people in jail today, more than any other country. And we’re spending about $80 billion a year to lock people up. We need major changes in our criminal justice system – including changes in drug laws,” Sanders said at a town hall meeting with George Mason University students. “Too many Americans have seen their lives destroyed because they have criminal records as a result of marijuana use. That’s wrong. That has got to change."

The Bill, titled "the ending Federal Marijuana Prohibition Act of 2015" seeks “To limit the application of Federal laws to the distribution and consumption of marihuana, and for other purposes.” Sanders’ Bill was submitted Nov. 4 to Congress to amend the Controlled Substance Act (CSA) of 1970. It is the first time a Bill to end marijuana prohibition at the federal level has been introduced in the Senate.

Sanders’ Bill is modeled after one originally introduced in the House by Rep. Jared Polis (D-Colo.) in 2013, and reintroduced this year as the “Regulate Marijuana Like Alcohol Act.” It removes marijuana from the Drug Enforcement Administration's list of the "most dangerous" drugs and strikes both “marihuana” and “tetrahydrocannabinols” from Schedule 1 of the CSA. The Senate Bill also allows states to decide whether they want to legalize marijuana for recreational or medical use without federal intervention, and to self-regulate transport of cannabis and cannabis products across state lines.

Polis' House Bill is more structured and specifically transfers the DEA's authority over marijuana to the Bureau of Alcohol, Tobacco, Firearms and Explosives. It amends federal alcohol laws to include provisions for importing and shipping marijuana.

Removing Cannabis as a Federally controlled, Schedule 1 Narcotic, would enable state-legal marijuana dispensaries and business owners access to banking services and business-related tax write-offs, currently denied to them under federal drug-trafficking laws.  Recreational and medical marijuana users in states that have legalized cannabis use would also be protected from federal prosecution.

A Gallup poll released in October showed that national support for legalizing cannabis is growing, with 58 percent favoring its legal use. Despite the forward motion, few are optimistic that the Bills can overcome stiff opposition in a Republican-controlled Congress.  In July the house killed a bipartisan proposal that would enable researchers to legally study marijuana in order to consider its possible reclassification.