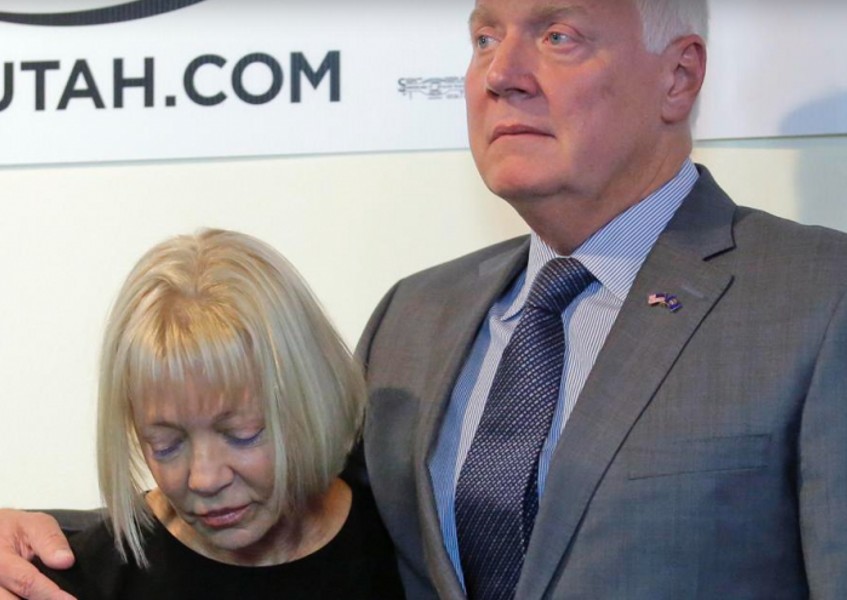 Hours after his wife pleaded guilty to misdemeanour pot-possession charges connected with two pounds of the drug found at their house, Utah's Democratic candidate for governor pushed Tuesday for the legalization of medical marijuana.

Mike Weinholtz said during an emotional news conference that current laws leave doctors with little choice but to prescribe powerful painkillers with a risk of addiction that have made opioid drugs an epidemic in Utah and elsewhere. Pot reduced Donna Weinholtz's pain so she could do things like ride bikes with her son and plant tulip bulbs, the couple said.

"What would you do if the person you love most in the world was faced with that decision?" he said. "Would you report them to the police? Would you insist they stop and live with pain too severe to sleep at night?"

Donna Weinholtz, 61, said marijuana was the best way for her to treat arthritis and degenerative spinal conditions that left her unable to get out of bed, sometimes for weeks.

"I, like many Utahns, made a deliberate and conscious decision to use cannabis knowing full well that it is against the law," she said. "I have faith the law will change."

Two proposals to expand access to medical pot died in the state legislature this year. A Utah legislative committee is expected to discuss the issue tomorrow.

Mike Weinholtz first revealed the investigation into his wife during his party's convention in April, shortly after the probe began when postal workers found a small amount of marijuanashe tried to mail to a home the couple owns in California.

The plea deal Donna Weinholtz struck with prosecutors Tuesday calls for a fine and probation rather than jail time.

She pleaded guilty to two counts, possession of marijuana and possession of drug paraphernalia. She agreed to serve one year of probation and pay a $3,800 fine. The deal, known as a plea in abeyance, also calls for her record to be cleared if she stays out of trouble for the next year.

Her lawyer, Walter Bugden, said it's a standard agreement for a first-time offender.