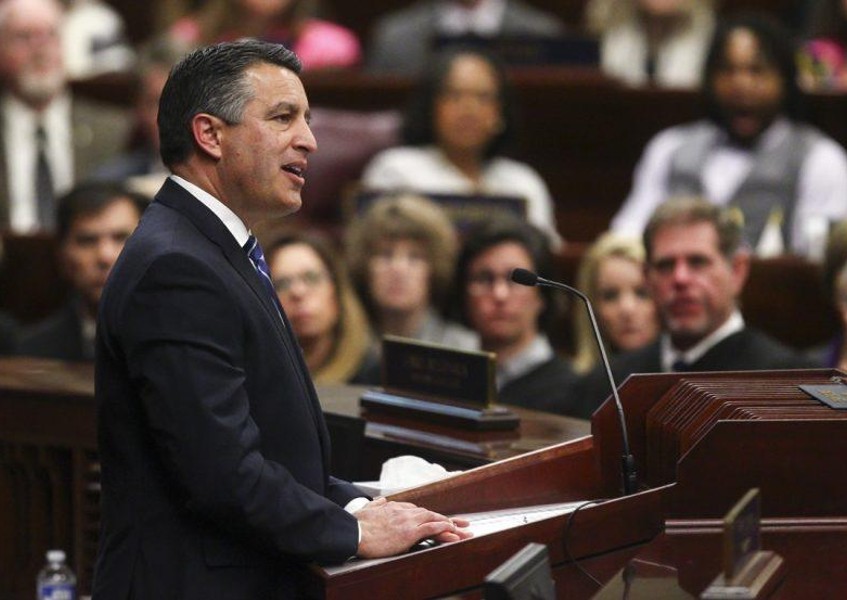 CARSON CITY, Nev. Gov. Brian Sandoval outlined his budget blueprint for his final two years in office by proposing more than $115 million in new spending for higher education and a raise for all state workers to be funded in large part by taxes on Nevada marijuana sales.

The second-term Republican unveiled a state budget proposal that would spend $8.1 billion over two years nearly 11 percent more than the previous $7.3 billion budget as part of a plan to continue Nevadas economic recovery since the Great Recession.

Im glad to report the state of our state has dramatically improved, and we are growing stronger every day, Sandoval said Tuesday in an hour-long speech to a joint session of the Legislature in Carson City.

Six years ago, many will recall the situation was quite different. The unemployment rate was a staggering 14 percent, and a record number of Nevadans were out of work, he said, noting unemployment fell to 5.1 percent last month

After pushing a $1.5 billion tax package through the Republican-controlled Legislature in 2015, the only new tax he proposed for the new Democrat-controlled Assembly and Senate is a 10 percent excise tax on the retail sale of recreational marijuana.

It would come on top of a 15 percent wholesale tax that already was included in the ballot initiative voters approved in November legalizing recreational pot in Nevada and generate about $100 million combined in new revenue over two years devoted exclusively to education.

While I did not support it, I respect the will of the voters who did, Sandoval said about the recreational measure that passed by a wide margin. I will ask regulators to limit the sale of marijuana products and packaging that appeal to children or may be mistaken for candy.

Medical pot sales, which already were legal, would remain free of the 10 percent retail tax, which is expected to account for about $70 million of the projected $100 million.

Sandoval, 53, a former federal judge who will be forced out of office because of term limits at the end of 2018, said his budget plan makes good on a promise to fund the states school voucher program after the Nevada Supreme Court ruled the current funding formula was illegal. He proposed $60 million be spent over the next two years on the Education Savings Account the Legislature approved and he signed into law in 2015. The program allows parents to claim up to $5,000 in state money to send their children to private or other alternative schools.

That part of his speech brought mixed reaction in the Legislature. I knew it would be a split house on that one, Sandoval said.

Senate Majority Leader Aaron Ford, D-Las Vegas, said in the Democratic response any money directed toward a voucher program will result in less money being made available to public schools.

We believe that this is the wrong priority for Nevadas kids, he said.

Ford said Nevada has made great strides under Sandovals tenure to diversify the economy and create new jobs but more has to be done to help those whove been left behind during the states economic recovery.

He said his own party will present an alternative Nevada Blueprint when the 2017 Legislature convenes Feb. 6.

The $115 million in new money for higher education is intended to cover growing enrollment at UNLV and the University of Nevada, Reno, as well as cover half the costs of building a new $83 million engineering building at UNR. Funding for UNLVs School of Medicine set to open next fall also continues at requested levels. Sandoval also asked for $20 million in one-time money to fully fund the millennium scholarship program to help Nevada high school graduates go to college, and more money for technical and vocational training at community colleges.

In addition to the 4 percent cost-of-living increase for all state workers, Sandoval proposed an additional 5 percent for correctional workers and information technology specialists. He says additional money also would be made available to cover increased costs in state workers health insurance.

Other budget priorities include a $100 million increase for a K-12 weighted school formula aimed at helping at-risk students who live in poverty or are learning to speak English ...