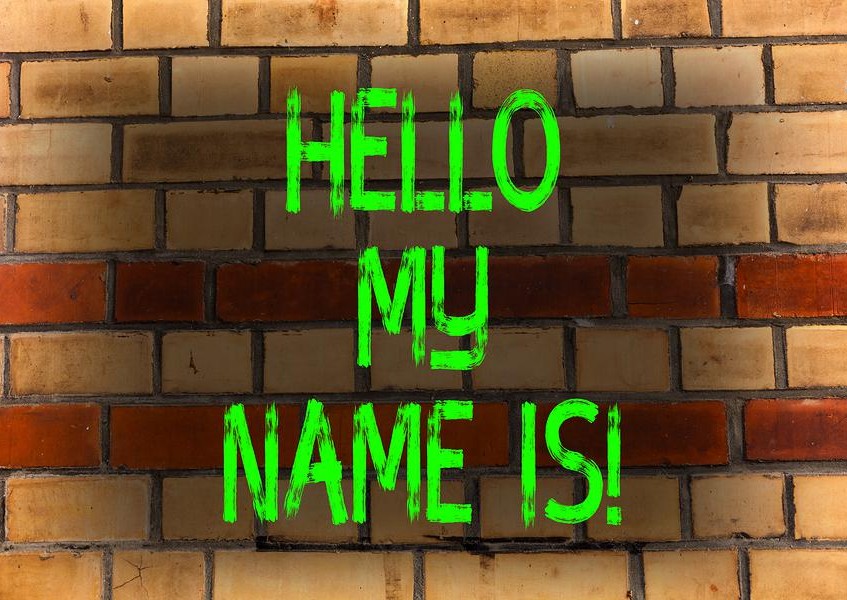 Do names mean anything? My name is “Michael.” My Irish elders told me it means “He who is like God!”  Actually, the origin in Hebrew is a rhetorical question: “Who is like God?” That is, no one is like God.

If I turn to Urban Dictionary, all the explanations are spot on. But my favorite is: “A kick-ass person that you can always trust. It might take some time for you to get to know him, but once you become friends, you'll never regret it. And if you miss out on that opportunity, you should get shot in the foot for being a total dumb ass for ruining a chance to know such an awesome guy.”

It goes on to say, “He's just an awesome guy, a badass friend, and someone you'd never forget once you've known him. Honestly, he's cool enough for you to want to be an older brother and even in the worst of moods he's way cooler than almost anyone else on this planet.”

My family and friends would probably challenge this analysis, but this is my version and I’m willing to stick with it. But this isn’t about me!

How do cannabis strains get their names?

Many of the cannabis names we know originated in the black market. Surreptitious growers, dealers, and users created a coded language for the products they were moving. Hippies, students, military, and other users labeled strains without much scientific or botanical interest. Some names categorized strains by color, aroma, and taste. Others empathized the land of origin or the expected experience. And, others combined the features like Acapulco Gold, Sour Diesel, and Afghan Kush.

While marijuana was prohibited, the names meant nothing because dealing in the shadows meant buying what was available regardless of what the provider claimed. Strains were purchased undercover, shared with others, and named and renamed as they moved around the smoking circle, bonfire, traveling band, or dorm room.

As cannabis use rose from the shadows towards the end of the 20th century and found legalized status in the 21st century, names took on a new value in research and marketing. Breeders, researchers, and dispensaries found a need to standardize name, origin, and content. Whether the arising names are meaningful depends on who is looking for meaning.

If strains can be traced to their genetic origin, the originating strain is considered a “landrace.” Those strains were once local to a place of origin like the Kush mountains bordering Afghanistan and Pakistan. Others originate in Ethiopia, Thailand, Lebanon, Honduras, and other regions.

Landrace strains remained local until popularity and travel moved them across the world in a modern Spice Trail. Many of them were crossbred to create hybrids of flavor and fragrance. Other breeders sought to improve yields, mold resistance, and environmental productivity.

Two to five generations of inbreeding, crossbreeding, and accidental development have produced thousands of variations threatening a loss of value in names.

Science and marketing have replaced casual naming. Breeders, for example, seek to name seeds that reflect botanical genetics but have a marketing appeal. They are, after all, selling their seeds.

They might choose names to reflect the effect like Blue Dream or Trainwreck. Some emphasize a color like White Widow or Granddaddy Purple. Others sell flavors like Key Lime Pie or Bubble Gum Kush. These are trade names developed for marketing, so any meaning is subjective. However, as time passes, the labels take on some standardization with customers expecting to find those effects, colors, and tastes.

Some strains develop names on the street, in slang, and among cliques. The U.S. imports some names and exports others. With celebrities entering the market, strains have co-opted their names. Others are named after cannabis advocates like Jack Herer, Ringo, Snoop Dog, and Willie Nelson.

Strains have been named with nonsense syllables, alliterative phrases, and satirical references to Charlie Sheen or Bob Saget. But if breeders or researchers have their way, arbitrary names must give way to strains with labels acknowledging their origin, development, and phenotype. Dispensaries, customers, and tracking authorities must have labeling standards.

Writing for Wired, Nick Stockton says, “as the social and legal windows shift towards acceptance, some sort of formal classification will be necessary. ‘From an industry standpoint, there have been moves towards developing more consistency,’ says Taylor West, deputy director of the National Cannabis Industry Association. ‘There's no real centralized information, so it's difficult for people to tell one strain of Strawberry Kush from the next’."

The popular cannabis strains have meaningless names. They have developed as underground codes based on color, flavor, and personal and generalize experience. Some have become universal from Afghanistan to Amsterdam to Atlanta.

Some breeders graft strains to improve hardiness, potency, and effects. The scientist in their head wants to label results genetically. But the marketers who employ them want names with high-impact sales appeal.

The consumer market clearly responds to clever names, but they would prefer standardization to help them judge and compare quality. If you buy Coca Cola or Goodyear products, you want assurance you are getting what you have been sold.

The careless and cross-purpose naming over generations has created confusion and uncertainty. Theoretically, more oversight and compliance mandates where cannabis has been legalized could bring control to names, advertising, and packaging in the consumer’s interest.

For example, where cannabis is legal, it encourages breeders, seeders, growers, and processors to copyright and patent strains. The process should reveal many named strains are merely versions of others and shake out the imitators in favor of a standard identity. Authenticating strains regardless of origin is particularly important to users seeking medical benefits. Prescription pharmaceuticals, for instance, have Latin names but trademark marketing names. Doing the same for cannabis strains would add value to their names.