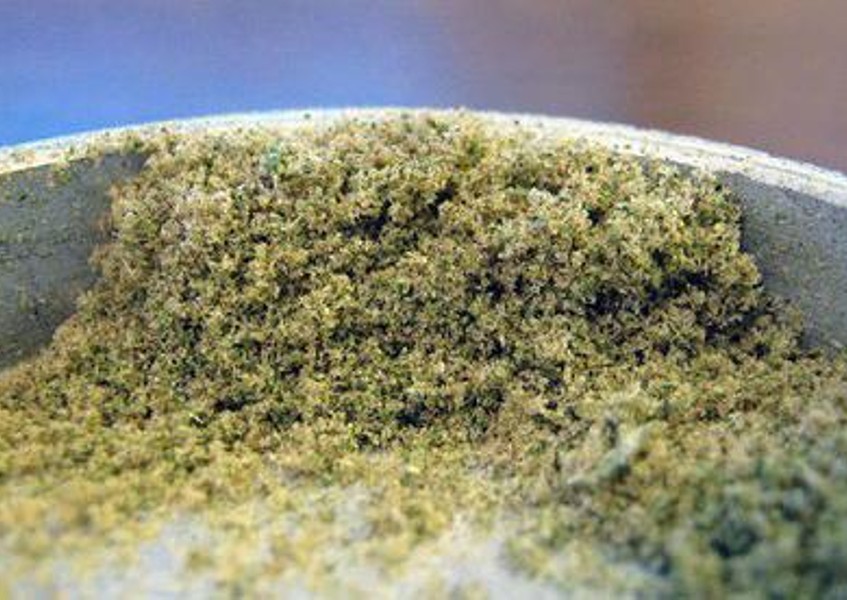 Cannabis trichomes are tiny resin glands that appear as mushroom-like crystals covering the bud, and to a lesser extent the leaves and stalk, of the marijuana plant. Trichomes are also the source of terpenes, which give marijuana strains their distinct, powerful odors.

It is also within trichomes that production occurs for cannabinoids, like tetrahydrocannibinol (THC), cannabidiol (CBD) and cannabinol (CBN). As these crystals dry and become released from the plant, they are referred to as kief or are collected and processed into hash.

Also known as “pollen,”  “dry sieve” or simply “sift,” keif generally refers to the unprocessed trichomes that fall off the marijuana plant.  Many people collect these crystals and sprinkle the fluffy, concentrated particles to the top of their joints or pipes to dramatically enhance the potency and flavor of their inhaled cannabis. Others prefer to smoke their kief solo.  Those who try this method should be aware that it can produce a far more intense high than is delivered in a typical joint or pipe.

While trichomes may be released naturally as marijuana dries, kief can be extracted more efficiently from the whole plant using a grinder. These ground trichomes can be used in a vaporizer or bong. If you choose to smoke your kief solo, be advised that the high THC content can produce a particularly potent high, so novices are advised to proceed with caution.

Kief is extracted from cannabis buds with a three-chambered herb grinder.  Bud is placed  in the top compartment, where it is finely ground and falls through to the second chamber. At the bottom of the center chamber is a fine screen that allows the tiny crystals to sift through and collect in the bottom.

Removing the sticky kief from that chamber requires the use of a kief scraper. A variety of tools are available for this purpose, ranging from hard plastic scrapers (many of which come with a grinder) to brushes with aluminum bristles.

While some users allow the kief to accumulate in the bottom of the grinder until ready for use, storing for later or until there is enough to make a high-THC concentrated CannaButter is a common practice.  Most kief connoisseurs recommend storing kief in small, tightly-lidded glass bottles in a cool dark place --- as always, the least heat and light exposure possible provides the best preservation of THC potency. A variety of devices are commercially available, including pocket-sized, clamshell-type containers that are lined with silicone.

Like kief, hash is a purified resin made from marijuana trichomes. To make hash, heat and pressure are applied to the kief, which ruptures the resin glands and changes its taste and effects, turning the end product into a dense block or strip.

How to Make Hash

Like kief, it is best to store your hash in an airtight, light-proof environment to preserve the potency of its THC.