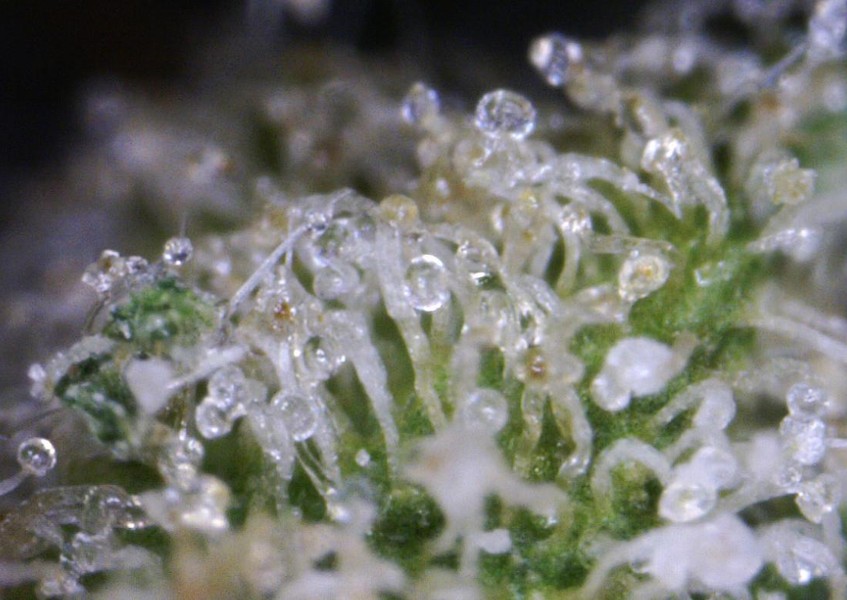 Terpenes, called terpenoids after they’ve been denatured through oxidation, are found in the resin and essential oils of plants and are responsible for their scent, flavor and color.  In cannabis, these oily compounds are secreted in the plant’s glandular trichomes. Aromatherapy, which is the practice of using essential oils to alter mood, increase cognitive function and enhance psychological and physical well being, is based on the physiological effects of exposure to terpenes.

More than 200 specific terpenes have been identified in marijuana plants, with a handful of them currently being studied for the “entourage effect” that characterizes how different chemical compounds in plants work together to amplify or moderate the impact of each.  For example, cannabis with active terpenes has been found to induce more psychoactive reaction than pure tetrahydrocannibinol (THC).

Terpenoid profiles vary dramatically from strain-to-strain, affecting not only their aromatic bouquets and flavors, but also influencing their medicinal properties. Some terpenes work together, while others act as agonists---inhibiting the effects of cannabinoids.

For example, some terpenoids dilate capillaries in the lungs, causing smoked or vaporized THC to enter the bloodstream more easily. Nerolidol, which is a sedative terpenoid, penetrates the skin and speeds absorption of topicals used for pain and skin conditions. Other terpenoids that increase blood flow, diminish respiratory pathogens and others have also been identified. Ongoing research is investigating the value of terpenoids for treating, among other things, pain, inflammation, bacterial and fungal infections, cancer, epilepsy, anxiety and depression.

It should be noted that the properties outlined below are based on preliminary research.  As terpenes are studied and hybrid cannabis strains are developed to incorporate specific characteristics, researchers believe that their array benefits and potential applications will be exponentially expanded.

Pinene is the most common terpene in the overall plant world and responsible for the smell associated with pine trees, Often found in cannabis, it is believed to counteract the effects of THC with regard to memory. Characteristics attributed to pinene include:

Strains high in pinene include Bubba Kush (indica), and the hybrids ChemDawg and Trainwreck.

Myrcene, which smells somewhat like cloves, is the most common cannabis terpene and is present in many varieties. Myrcene is believed to work with THC to increase its psychoactive effects.  Its other characteristics include:

Limonene emits the smell associated with citrus fruits. The anti-cancer properties of limonene have generated medical attention and it is among its most promising traits. Potential treatment properties are noted as:

Linalool is a minor terpene and has a floral smell, most notably like lavender. It is best known for its tranquilizing effects and has been found helpful for those suffering from psychosis. Its properties have been identified as:

Carophyllene has a black pepper, spicy smell. This terpene has the particularity of selectively activate the cannabinoid 2 receptors (CB2), while it is not a cannabinoid. This discovery opens the door to many possibilities in medicinal research. Its potential medical applications include:

Borneol has aroma of mint and camphor. It is used in Chinese medicine as:

Eucalyptol has the characteristic smell of the eucalyptus tree and is found in small amounts in marijuana. It is known for:

Nerolidol, with woody and fresh bark aromas, can be found in ginger, niaouli and citronella. It has the following properties:

Testing cannabis strains for terpenes remains an evolving science.  The oil-extraction process, if it entails heating the plant, can destroy the terpenes because they evaporate at significantly lower temperatures than THC. Using toxic solvents like hexane can leave poisonous residues behind and the cleaner, CO2 extraction requires expensive, sophisticated equipment and technical expertise that are prohibitive for independent researchers.

As more states legalize cannabis for medicinal and recreational purposes, strain-specific development and research will become more accessible. Once clinical terpene extraction and peer-reviewed research are underway, it is expected that dozens of new treatments will be discovered and made available to those battling a wide range of disorders and diseases.