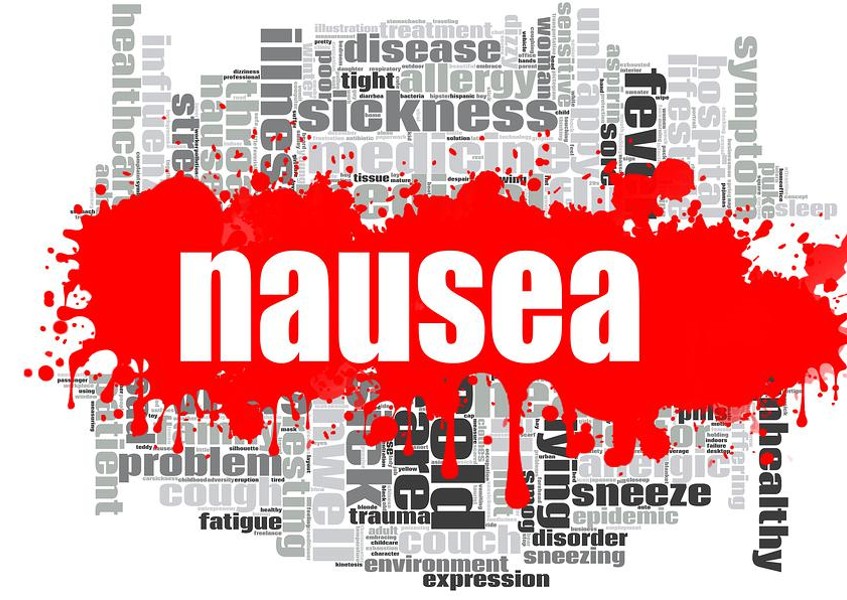 Cannabis can cause nausea, especially in first-time smokers. Yet, it is recommended for people who suffer from nausea. It’s worth looking into how you might reconcile this contradiction.

Cannabinoid Hyperemesis Syndrome (CHS) leads to repeated bouts of heavy vomiting. The condition is rare. According to Pauline Bartolone reporting for NPR, “It affects a small population — namely, a subset of marijuana users who smoke multiple times a day for months, years or even decades.”

In addition to severe nausea and vomiting, CHS may present as abdominal discomfort, bloating, diarrhea, excessive sweating, and weight loss. And, there’s a worry that hyperemesis can produce dehydration enough to shut the kidneys down. Doctors in Colorado and California have reported increases in patient complaints since cannabis was legalized. 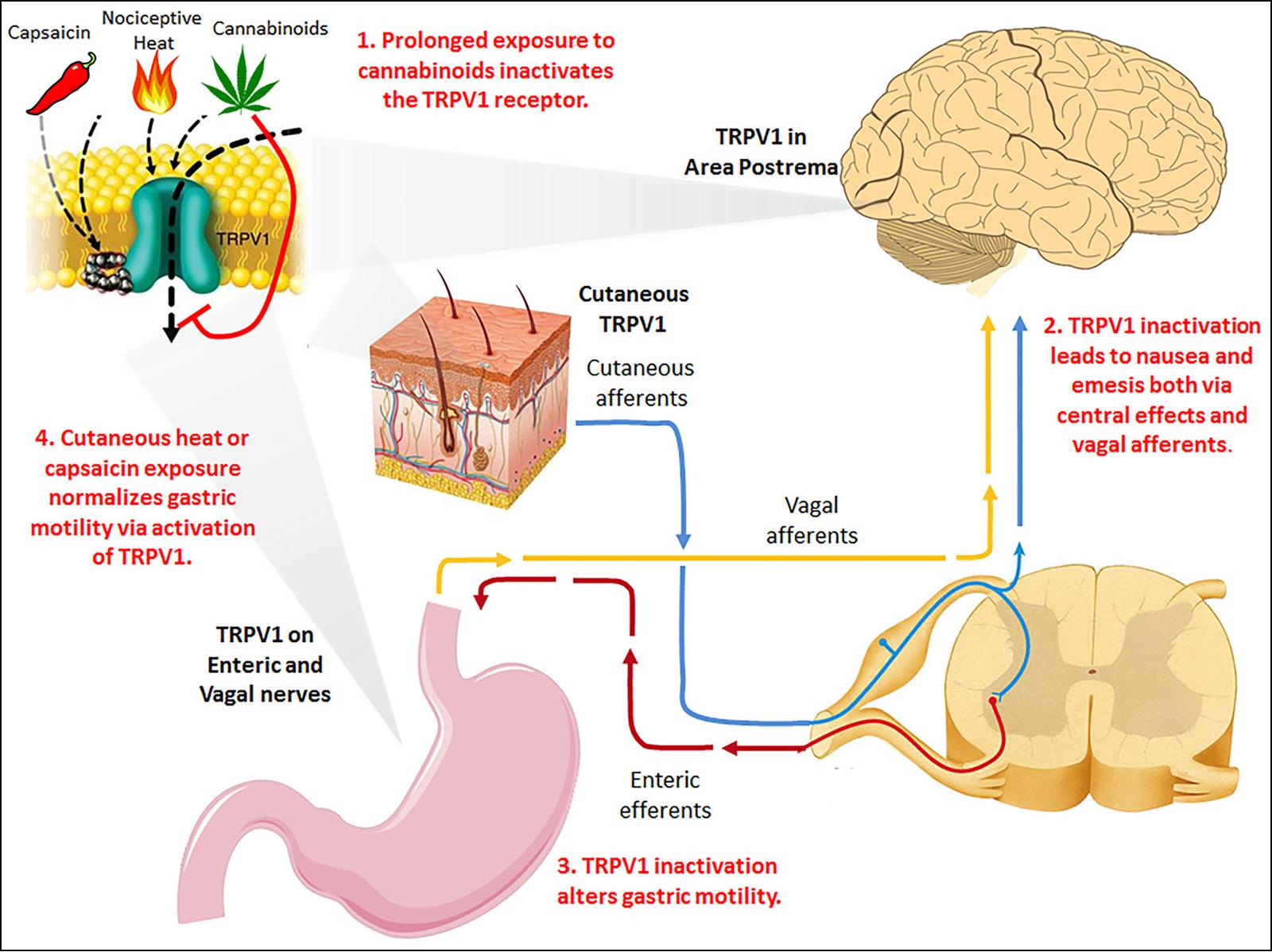 Project CBD says, “More than 90% of cannabis users who experience these symptoms also have a compulsion to bathe in hot water during the episode, reporting that it alleviates the discomfort.” And, it’s this compulsion that helps doctors differentiate the condition from other health problems.

CHS has been treated with topical capsaicin, haloperidol, ondansetron, propranolol, standard anti-emetics, and other pharmaceuticals. But, nothing works if the patient continues to consume cannabis.

CHS is rare, limited to those who are heavy cannabis users over long periods and can be eliminated if the user stops.

So, allowing for those exceptions, you can consider the antiemetic properties in cannabis that have made it a remedy for many. Much hinges on the British Journal of Pharmacology study published in 2011 which said, “evidence from animal experiments suggests that cannabinoids may be especially useful in treating the more difficult to control symptoms of nausea and anticipatory nausea in chemotherapy patients, which are less well controlled by the currently available conventional pharmaceutical agents.” It attributed much of that success to the presence of CBD.

As far back as 1990, a survey of oncologists by American Society of Clinical Oncology (ASCO) found, “Of the respondents who expressed an opinion, a majority (54%) thought marijuana should be available by prescription.” And, it’s likely their vote would be higher today.

There is some understanding that the patient reaction is subjective. That is, the cannabis properties induce a calm that thwarts the related anxiety, depression, and smooth muscle, especially among chemotherapy patients and those under treatment for HIV/AIDS conditions.

Cannabis comes in many forms. Patients can take it as edibles, drinks, teas, candies, and lozenges without the discomfort or side effects of smoking marijuana. But, if you’re shopping for cannabis strains that appear to benefit those suffering from nausea and vomiting.

1. Granddaddy Purple offers a heavy hit. Indica-strong it produces a euphoric lift and total body relaxation. While its 17% to 23% THC would affect anyone, for some patients, it relieves patients of the pain and preoccupation with the nauseous feelings.

While the THC impact distracts you, the CBD content works on migraines and smooth muscle contractions. Its strong impact and appetite-stimulating effects are not for all-day use. But, it will work well after dinner or late in the evening, assuring your brain and body some restful sleep.

2. Blueberry is a strong Indica-dominant hybrid. Its 16% to 25% THC ensures a long-lasting and sedating relaxation. The relaxation relieves depression, pain, nausea, and vomiting, a combo that often happens as one.

Blueberry’s prominence and popularity among cannabis strains have a lot to do with its aromas and flavors. But, it appears to favorably affect occasional or chronic nausea and vomiting.

3. Chemdawg ranks high among everyone’s list of heavy-hitting comforting strains. Patients and other users like it because it acts fast. But, the brain and body effects are so strong, Chemdawg is not recommended for first-time users.

Chemdawg is slightly Indica-dominant with a 55: 45 ratio and 19% THC. Historically, it has been popular among those burdened with ADHD, anxiety, arthritis, migraines, and PMS as well as nausea and vomiting. It produces a full-body relaxation without couchlock so it can be used any time of day you can handle the potency.

4. Berry White is another Indica-dominant strain with a super uplift. A happy high is a comfort to those dealing with nausea and vomiting. Tangy and sweet smelling. Berry White or White Berry is 100% Indica.

Still, it produces a balanced effect on mind and body. The euphoria hits fast warming and settling with meditation and mellow couch-lock. It not only relieves nausea, but it also improves appetite.

5. Lavender or Lavender Kush can contain 27% THC. That potency may be too much for first-time users. The fully relaxing effects on the body and euphoric effects on the mind, this strain treats gastrointestinal problems along with anxiety and depression.

The rich floral tones and sweet lavender taste explain some of its popularity. But, it also offers a strong, relaxing, happy high to soothe away anxiety and lift depression. New users may risk some paranoia.

Treating nausea with cannabis: the downside and upside

Chronic cannabis users risk Cannabis Hyperemesis Syndrome. But, cannabis can benefit those suffering from nausea, vomiting, and loss of appetite. It has been helpful to and recommended for patients suffering from side-effects of chemotherapy and from HIV/AIDS therapies.

And, if you study the recommended strains, you see a consistent prominence of Indica-dominant strains. So, you might conclude the potent THC content lifts cerebral perceptions enough to distract and/or relieve the stress and concerns attached to the condition. These strains also have enough Sativa presence to assure relaxing effects on the brain, body, and gastrointestinal system.