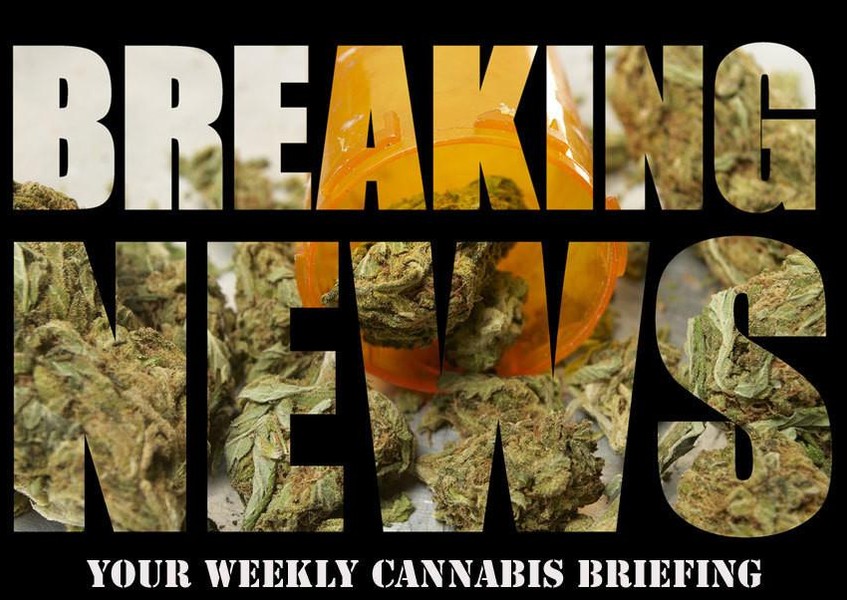 1. Alaska has a problem. US News reported April 27th that Juneau’s Rain Forest Farms, an authorized marijuana retailer, sent its tax payment in cash to the Anchorage tax office. But, the U.S. Postal Service sent it back. According to the postal service, "any proceeds from the selling of (marijuana) is considered drug proceeds under federal law."

Locked by law from doing business with banks, Rain Forest must work in cash. And, Alaska’s tax office admits, “these legitimate businesspeople to pay their taxes."

2. Any graduation high school senior in Colorado’s Pueblo County can now apply for a $1,000 scholarship if they are bound for Pueblo Community College or Colorado State University-Pueblo. The county’s $475,000 share of cannabis tax funds scholarships for 300-400 seniors with any leftover moneys distributed on merit and need.

3. California, even under its liberalizing legislation, makes pot delivery by truck a risk in L.A. If it marijuana remains a cash only basis, drivers with cash and pot are sitting ducks.

Eaze delivery service works throughout California, but no in the City of Angels. So, it has opted to test delivery by drone. They displayed its potential at the recent Cannabis Cup in San Bernardino. It will be a long time before it is operational, but it presents a challenging future.

4. An Israeli teen is part of a research study into the effects of cannabidiol (CBD)on young people in the Autism spectrum, the same developmental disorder affecting so many American children. The only medications approved in the U.S. are anti-psychotics with significant negative side-effects.

But, Israel, where marijuana remains illegal, supports the clinical research of pediatrician Adi Aran. It’s too early to come to conclusions, but according to Dr. Aran notes, “many children have shown significant improvements. Some no longer hurt themselves or throw tantrums. Some are more communicative. Others were able to return to classes after they had been suspended for behavioral problems.”

5. Nevada’s Senate and Assembly are looking at a several options on Marijuana legislation.

6. According to PennLive, Pennsylvania hosted a World Medical Conference and Expo in Pittsburg for two days starting April 21. Speakers and vendors promoted the medical benefits of marijuana in a state that has approved its use but is working out administrative regulations. Workshops on cooking with cannabis, pediatric care, and treatment for military veterans.

7. University of Connecticut research is interested in the evidence that chili peppers and marijuana interact with the same receptor in our stomachs. In experiments on mice, they found that the capsaicin in chili peppers reduced inflammation in the mice stomachs and cured Type I diabetes in mice.

The capsaicin binds with a gastrointestinal receptor TRPV 1 to produce anandamide. And, anandamide is a known element in marijuana. ScienceDaily reports, “If the epidemiological data shows a significant change, that would make a testable case that anandamide or other cannabinoids could be used as therapeutic drugs to treat certain disorders of the stomach, pancreas, intestines and colon.”

8. The Local says, “the Research Initiative on Cannabis Consumption is hoping to get an application for a new study approved so that they can analyze the ‘consequences of cannabis for psychologically healthy, adult consumers’.”

A Berlin lawyer and a clinical psych professor at the Medical School Hamburg are seeking approval from Germany’s Drugs and Medical Devices. They are looking for volunteers to pick up 30 grams a month for recreational use. They exclude those under 18, novice pot smokers, and those with the potential for addiction. They have 2,000 people signed up – of the 25,000 Berliners they are looking for.

Research Director Prof. Dr. Thomas Schnell explains, “Cannabis as a drug has been largely neglected by research, with the exception of specific subgroups that are conspicuous in the health system, either by being addicted to cannabis or by a severe mental disorder, but these pathologically conspicuous subgroups are the least of the total population of cannabis users. Most consumers do not seem to develop either a dependency or a clinically relevant mental disorder, so the extent to which cannabis use is effective in these healthy consumers, apart from acute noise, should therefore be explored more intensively."

9. US News reported on April 26, “An unintended byproduct of medical marijuana laws could be a sharper increase in illicit pot use, a new U.S. study reports.” Illicit pot use increased significantly more in states that passed medical marijuana laws compared to other states, and an increase in people who can't stop using pot even though it's interfering with many aspects of their lives.

The study also suggests the medical marijuana states restricting the number of dispensaries and tightly regulating the system – not California or Colorado - appear to have different illicit pot use patterns.

10. Jeff Hale reports the National District Attorneys Association’s call for the national enforcement of laws against drugs including marijuana. They argue, “Federal drug enforcement policy regarding the manufacture, importation, possession, use and distribution of marijuana should be applied consistently across the nation to maintain respect for the rule of law.”

They blame an alleged increase in adolescent use as the root of their concerns. NBC News reported on April 26 that, for the first time, accidents connected to drugs have outnumbered those related to alcohol with many drivers using multiple drugs. Such positions could firmly support Attorney General Jeff Session’s stated commitment to reigning in marijuana use.