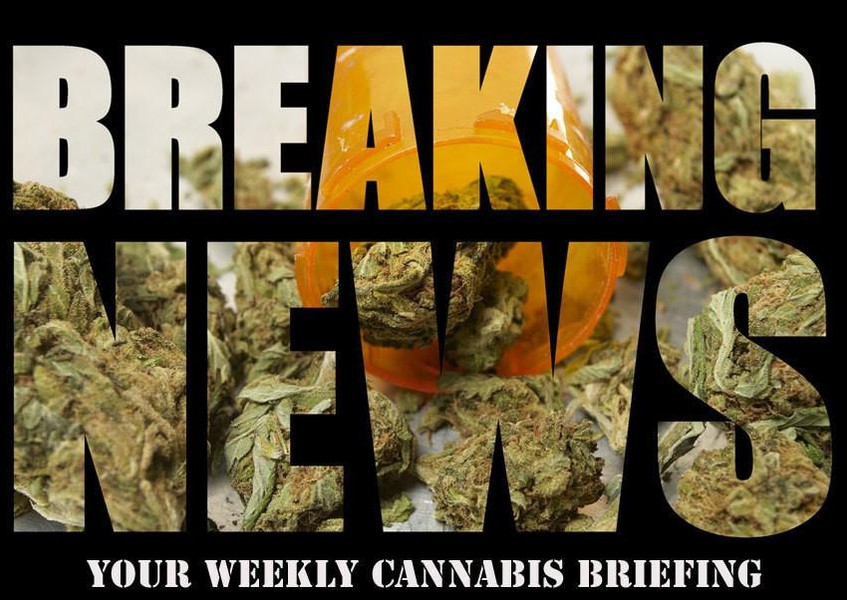 1. Rolling Stone reports that the U.S. Congress has included “an extension of a provision that keeps [U.S. Attorney General Jeff] Sessions’ hands tied.” It prevents the DOJ from going after growers, sellers, and users in the states and D.C. where medical marijuana has been approved. This is a compromise bill attached to a bill to avoid a government shutdown.

2. New Hampshire’s Union Leader reported May that legalization for possession of small amounts of grass passed a critical test on May 2nd. HB 640 squeezed through the Senate Judiciary Committee with a 3-2 vote.

In the New Hampshire system, the Senate Judiciary Committee recommends that a bill “ought to pass” (or not). So, this decision pushes forward the bill that had been approved 318-36 on the House on March 8th.

To satisfy law enforcement concerns, Sen. Jeb Bradley (R-Wolfeboro) amended the bill to reduce the amount carried from one ounce to three-quarters of an ounce. In addition, “the first three offenses in a three-year period by someone 18 or older would be treated as violations, with fines payable by mail. [But] A fourth offense would be considered a Class B misdemeanor, not subject to arrest.”

Both houses are likely to approved the amended bill.

3. A survey of 150 current and former NFL players reported May 3rd concludes 91% of respondents had taken opiate-based drugs for pain “with 45 percent admitting to feeling pressured into using these drugs by team doctors, staff and teammates.” Another 85% believe medical marijuana would lead to less prescription pain-killer use, and 72% feel player safety is not a prime concern of the NFL. At the same time, Roger Goodell remains strongly opposed to admitting use of medical marijuana as a remedy for pain.

5. NPR reported May 3 that the City of Huntington, West Virginia is suing three Big Pharma companies for flooding their area with prescription opioids leading Huntington to break all national records for opiate overdosing.

Personal injury lawyer Paul Farrell hopes to capitalize on WV legislative code, “the West Virginia Legislature hereby gives authority to the county commission to eliminate hazards to public health and safety and to abate or cause to be abated public nuisances. It was pow. It hit me right in the nose. This is exactly what I need.”

He is suing on behalf of seven counties claiming that pharmaceuticals flooded their region with opioids before pulling back under federal restrictions and leaving addicted citizens to seek out more powerful drugs.

6. Wichita City, KS is thinking over the idea of reducing penalties for first-time marijuana possession. City voters proposed cutting the penalty to $50 some two years ago only to see their initiative overturned by their state Supreme Court.

Advocates are petitioning again to put an initiative on the ballot in hopes the city council will make that unnecessary with a suitable adjustment. The council has moved to defer a decision for two weeks on enabling a $50 fine through citation. It wouldn’t override the heavier state fine of $1,000, but it would help city police and courts.

7. Health Canada reports the discovery on May 1 of a banned pesticide in the work of Hydropothecary Corp. Its Gatineau product allegedly contains low levels of myclobutanil, a known carcinogen used to kill mildew. Myclobutanil is prohibited because it releases hydrogen cyanide when heated for smoking.

According to the May 3, 2017  The Globe and Mail, “Hydropothecary has halted all sales and shipments to customers while it investigates the problem.” And, “The amounts of myclobutanil evident in the Hydropothecary tests are smaller than the problems that triggered the Organigram, Mettrum and Aurora recalls, which involved myclobutanil levels of up to 20 parts per million (ppm).”

8. The Orlando Weekly reported progress on the Florida legislature’s steps to reach consensus on medical marijuana operations before it ends its session and recesses on Friday. Changes negotiated by May 2nd would authorize a dozen dispensing locations.

“But, the House plan passed by a 105-9 vote Tuesday would require health officials to add 10 new medical marijuana treatment centers by next summer to the seven businesses currently licensed to grow, process and dispense cannabis products. Under the Senate proposal (SB 406), health officials would have to grant five new licenses by October and more new licenses as the number of patients registered for the treatment increases, something also included in the House plan.”

The revised bill allows “Florida businesses that have been operating for five years to apply for a license.”  However, the final measure lets patients use vaporizers or edibles, but would ban smoking of marijuana products, something critics complain violates the spirit of the constitutional amendment.

9. The Denver Post sees Colorado looking to raise the special sales tax on marijuana by 5% to the maximum 15%. House Majority Leader KC Becker (D-Boulder) has seeded a proposal to raise money for state highways and eliminate a budget shortfall for hospitals.

This plan would allocate the new dollars “for rural schools and a tax break for business owners on personal property — two purposes that diverge from the original intent of voters who in 2013 approved Proposition AA imposing taxes on recreational marijuana.”

10. U.S. News reports White House leaks ending the ambition of U.S. Representative Tom Marino (R-PA) to be President Trump’s Drug Czar. Just weeks after his name was floated as having Trump’s confidence, he is apparently out of the running.

A member of the House since 2011, he apparently is trailing bad news. One allegation had him judge-shopping to win get a friend’s cocaine-dealing charge relieved. In 2006, Marino resigned as U.S. Attorney after providing a personal reference for Louis DeNaples, a convicted felon who wanted to start a casino who had also paid $250,000 for legal work.

A tough anti-drug hard-liner, he has voted against protecting state programs from federal intervention and supports hospitalization for those convicted of drug crimes. But, according to High Times, “Marino had received sizable campaign contributions from the pharmaceutical industry and repaid the largesse by working for the country’s opiate lobby and against efforts to reduce the amount of prescription pills in America.”