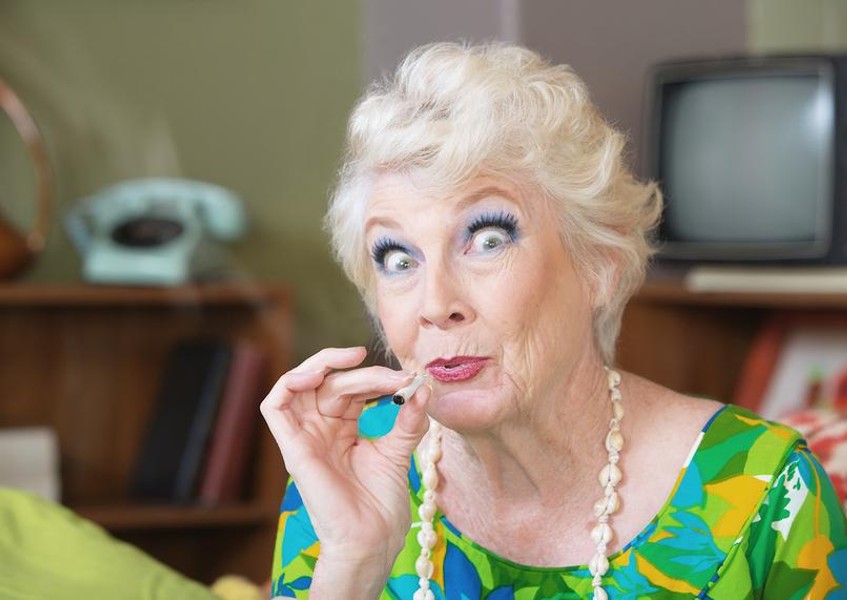 What goes around comes around. The folks who celebrated the Summer of Love in 1967 spent their middle years in successful or frustrating careers. Now, they have returned to some of the pleasure of their youth in cannabis.

With medical marijuana available in 29 plus states and legal recreational-use cannabis spreading from state to state, seniors have become the fastest-growing demographic among cannabis users.

Today’s stronger cannabis is not the product of their youth, and more cannabis-derivatives are now accessible. But, people over 55 are flocking to dispensaries everywhere permitted.

7 reasons seniors are the fastest-growing demographic:

The Centers for Disease Control gathered data from 2002 to 2014 and concluded, “During 2002–2014, national estimates for marijuana use have decreased, specifically the past month, past year, and daily or almost daily marijuana use and past year new initiates among the U.S. population aged 12–17 years.”

The same study found, “marijuana use among those 55 to 64 years old rose from 1.1 percent of the population to 6.1 percent, a 455 percent increase.” It also found that half of those using at 50 also used before age 30.

1. Socially Acceptable: Baby Boomers have lived long enough to find cannabis is now socially acceptable. Expanding legalization is the result of and a factor in the increasing social awareness and acceptance.

Cannabis has become the means to enjoyable social gatherings with senior peers. The laughter and conversation that cannabis facilitates making new friends among the elderly. It can add fun to the card game, perk up the shuffleboard, or get them dancing.

2. Activists: Boomers have become advocates and growing numbers among the 60% who favor additional cannabis rights. They are, after all, the generation that embraced civil rights, women’s rights, and progressive social reforms.

Cannabis has always been associated with their counter-culture mindset and activism. And, advocacy of cannabis rights offers a new nonviolent social issue to support.

3. Medical Care: Growing older is a pain, metaphorically and actually. So, seniors, look to revisit their past, will find medical therapy as well as escape.

Research experiments on test animals have shown positive therapeutic effects on patients suffering from Parkinson’s disease and Alzheimer’s Disease with results indicating that cannabinoids — or an entourage effect of cannabinoids — reduce the plaque buildup in brain cells.

Cannabis has long served as a treatment for the chronic pain of arthritis and the involuntary spasticity attached to some problems among the elderly. And, it has proven value in treating nausea, vomiting, and loss of appetite.

4. Anti-depression: Depression affects the elderly deeply. With health concerns, financial worries, and loneliness after the death of a spouse, they suffer silently. Mental Health America reports research that indicates:

While cannabis may not be a silver bullet for every case, it bears generations of witness to its ability to relieve anxiety and depression.

5. Opioid Alternative: Most seniors are on a regimen of pharmacy prescriptions, some of which have negative effects. Complicated with depression, they may find themselves dependent on alcohol and/or medications.

Seniors for CBD reports, “The importance of reducing prescription drug use among seniors should not be understated. Drug abuse among people over the age of 65 is a growing epidemic; nearly 55 percent of opioid prescriptions were doled out to seniors in 2013 (even though they make up only 13 percent of the population) which is an increase of more than 20 percent over the previous five years.”

The chronic pain associated with advancing arthritis and declining overall health leads patients to pain management, often involving opioids. With enough research and guidance, seniors can find cannabis relief from some of those same conditions, enough to let them wean off prescription painkillers or addiction to multiple medications.

6. Brain Booster: Scientific American covered research at the University of Bonn where they administered THC (∆-9 tetrahydrocannabinol) to young, mature and aged mice. Not unexpectedly, the young mice performed worse on cognitive tests for memory and learning.

“But, after the elderly animals were given THC, their performances improved to the point that they resembled those of young, untreated mice.” You can infer that cannabinoids replicate the brain’s endogenous cannabinoids, triggering specific neural receptors.

The body’s natural and extensive endocannabinoid system (ECS) declines with aging, but cannabis is known to have a dynamic synergy with the system and may, among seniors, refresh, revitalize, and renew the ECS.

7. Smoking Alternative: Older Americans are discovering they don’t have to smoke marijuana to benefit from cannabis. Seniors should avoid the risks to lungs and heart in smoking. Smoking risks irritation and damage to respiration and blood pressure where there may already be health problems.

However, cannabis can be used in many other ways. Edible candies, chews, lollipops, and teas can be consumed by seniors or administered by caregivers. Topicals and lotions can relieve pain when massaged into the skin. And, transdermal patches can treat pain with cannabis.

Today’s cannabis is not your father’s. Baby Boomers willing to try today’s product must understand they will find it stronger. If they are under your care, you should talk to them about what’s in it for them.

You should direct them to research related to their respective situations. They should keep their doctors informed, and they should be open with you about their use and how it is working.

If you’re the senior citizen, you can discuss the cannabis efficacy with a medical marijuana doctor and/or the budtender at your medical cannabis dispensary. You should research to improve your comfort level. And, you should not use cannabis alone until you can do it on your own.