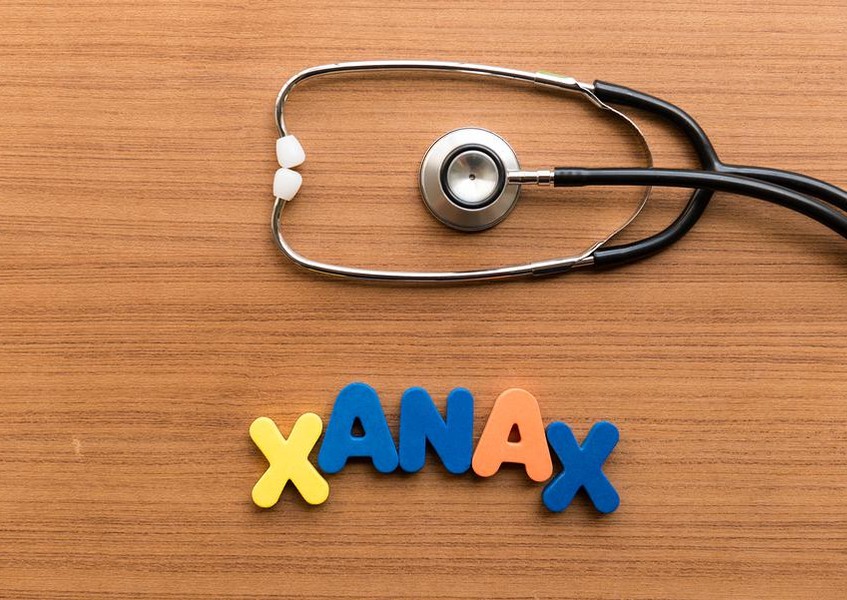 Ouch! You can’t ask questions like this. This really takes us out on a limb. We do not pretend to be doctors, neurologists, psychiatrists, or pharmaceutical researchers. Any opinion here requires a load of disclaimers. But maybe we can discuss the claims out there.

The anecdotal history covering at least two millennia records millions claiming cannabis has relieved their anxiety. Xanax has been around a relatively few years, but doctors and patients swear to its value. All we can do is keep our minds open.

What you need to know about anxiety

“Anxiety” may be a modern label, but it has a history. It’s at least as old as the apes in Stanley Kubrick’s “2001: A Space Odyssey.” They didn’t learn it from parent apes; animals are wired with some fright or flight mechanism. Scriptures, legends, myths, folklore, and fairytales all recount come version. But fright or flight would not be diagnosed until the 1920s.

Sheryl Ankrom, writing for Very Well Mind, explains, “the fight or flight response is the first part of the involuntary general adaptation syndrome. In the fight or flight response, stimuli result in stimulation of the sympathetic nervous system. The sympathetic nervous system then sends a message to the adrenal glands which results in the release of the stress hormones, epinephrine (adrenaline,) norepinephrine (noradrenaline,) and cortisol, among others. These hormones, in turn, lead to the symptoms associated with the response.”

This may lead to Increased heart rate, heavy and rapid breathing, dilated pupils, loss of hearing and peripheral vision, sweating and shaking. Multiple factors influence the degree of response:

The reaction to a standing and growling grizzly bear will be much stronger than that created by a similar bear pacing in its zoo cage. The fear will escalate if you see a car speeding toward you, but you won’t feel fear if the car mows you down without your seeing it coming. If fright is a bit of subjective experience, its effects are real, nonetheless.

Anxiety is best diagnosed and treated by doctors, psychiatrists, and neurologists.

What you need to know about Xanax

Xanax (alprazolam) is a benzodiazepine, the single most prescribed psychiatric medication in the U.S.  According to Medical News Today, “Xanax slows down the movement of brain chemicals that may have become unbalanced, resulting in a reduction in nervous tension and anxiety. Xanax works by boosting the effects of a natural chemical made in the brain called gamma-aminobutyric acid (GABA).”

It is not recommended for those with allergies to benzodiazepines, narrow-angle glaucoma, alcoholism-related liver disease, impaired hepatic or renal functions, and older or obese adults. And, it is counter-indicated for patients treating with Sporanox or Nizoral.

Xanax is routinely abused by people with or without diagnosis and prescription. Medical News Today reports, “According to the Treatment Episode Data Set, the number of individuals seeking treatment for benzodiazepine abuse almost tripled from 1998-2008. Long-term abuse and addiction to Xanax are associated with depression, psychotic experiences, and aggressive or impulsive behavior. According to the Substance Abuse and Mental Health Services Administration, in 2011, there were over 1.2 million emergency department (ER) visits overall related to the nonmedical use of prescription drugs - Xanax was involved in 10 percent of those visits.”

What you need to know about cannabis and anxiety

U.S. Government restrictions on the cultivation and research of cannabis, we have no scientific way of comparing Xanax and Cannabis on an oranges-to-oranges basis.

A 2012 study published in Recent Patents on CNS Drug Discovery asserted, “The main psychoactive ingredient of hemp, Δ9-tetrahydrocannabinol (THC), and its synthetic cannabinoid analogs have been reported to either attenuate or exacerbate anxiety and fear-related behaviors in humans and experimental animals.” That is, the potency of THC may increase anxiety to the point of panic attacks and hallucinations. The CBD, however, is known to offset THC and to positive affect imbalances contributing to anxiety.

Lacking the final scientific word on human testing, it appears cannabis triggers a mechanism of action like Xanax in several ways:

The way I see it

Xanax could silence me in a minute. They have lawyers enough to keep me in my place. But, given the potential addiction, negative side-effects, and adverse drug interactions, Xanax might be the remedy of last resort.

Cannabis, on the other hand, has a low addiction profile, minor negative side-effects, no reported related deaths, and no known drug interactions except advice that it should not be smoked during pregnancy. That’s enough to make it the therapy of first resort.