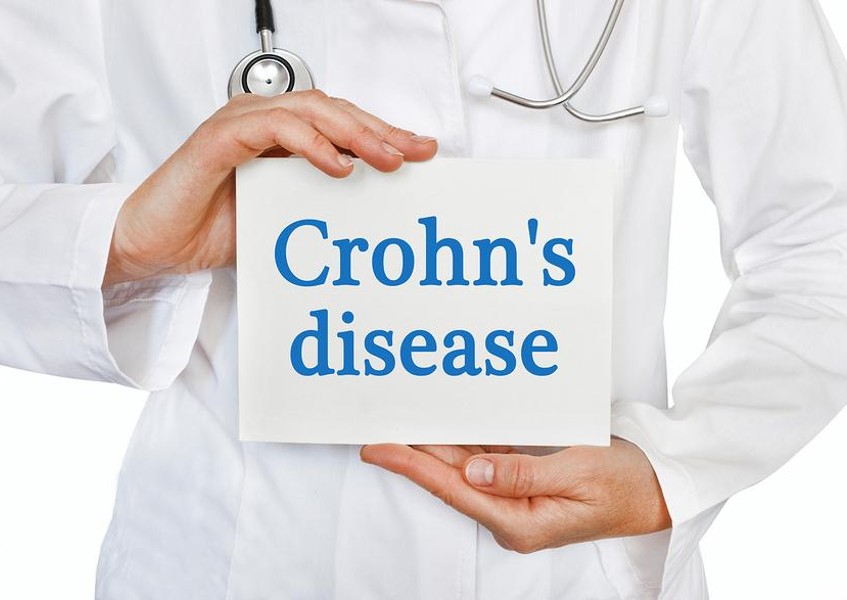 There’s a blog titled “medical marijuana defeats Crohn’s Disease” (SFGate). That’s a dangerous and misleading claim. It’s our contention that cannabis can relieve the symptoms of Crohn’s Disease, but that’s different from “defeating” it.

People suffer terribly from this disease, and if cannabis can help them, we need to be as clear and forthcoming as possible about what it can do.

What is Crohn’s Disease?

Dr. Burrill B. Crohn described the disease in 1932 along with his colleagues Dr. Leon Ginzburg and Dr. Gordon D. Oppenheimer. A chronic inflammatory condition of the gastrointestinal tract (GI tract), it is classified as an inflammatory bowel disease (IBD).

Crohn’s disease, however, can affect the entire thickness of the bowel wall and skip, leaving normal areas in between patches of diseased intestine.

Crohn’s runs in families. According to the Crohn’s & Colitis Foundation, “Studies have shown that 5% to 20% of affected individuals have a first – degree relative (parents, child, or sibling) with one of the diseases. The risk is greater with Crohn’s disease than ulcerative colitis. The risk is also substantially higher when both parents have IBD.” These conditions are also most common among people of eastern European backgrounds, Jews of European descent, and African American populations.

Of the 780,000 affected Americans, Crohn’s affects men and women equally between the ages of 15 to 35. But, the causes are not clear.

Diet and stress do not cause Crohn’s Disease even though they may irritate the condition. Researchers are convinced that the causes are genetic and environmental.

It would appear the victims of Crohn’s have systems that are confused. When things are normal, the GI tract houses the harmless bacteria that help the digestion. It’s the immune system’s job to attack and destroy foreign bacteria, fungi, viruses, and other enemy microorganisms.

The Mayo Clinic lists the symptoms of Crohn’s Disease, pointing out they may appear mild to severe. And, pain and discomfort may accompany them.

And, you should see a doctor if you have any of these symptoms or z combination of them.

Doctors may prescribe medications to control the inflammation.

Surgery may be necessary to remove fistulas, stop life-threatening bleeding, open intestinal obstructions, or problems that do not respond to medication. The National Institute of Diabetes and Digestive and Kidney Diseases (DIDDK)says, “nearly 60 percent of people had surgery within 20 years of having Crohn’s disease.” They list small bowel resection, laparoscopic surgery, subtotal colectomy, proctocolectomy, and ileostomy. All these operations take you out of work and action for days to weeks, and the more colon they remove, they more problems you will have.

A 2016 study published in Gastroenterology & Hepatology claimed cannabis and derivatives “have grown increasingly popular as a potential therapy for inflammatory bowel disease (IBD).” It worked on laboratory mice, but “has yet to be determined in human populations whether cannabinoids have therapeutic anti-inflammatory effects in IBD or are simply masking its many debilitating symptoms.”

A 2017 study in Cochrane Library revisits the research conclusions in earlier studies.Studies have found a higher prevalence of cannabis use in patients with IBD who claim it relieves symptoms such as abdominal pain, diarrhea, and reduced appetite (Lal 2011; Weiss 2015). It is unclear if this is due to the known psychotropic effects of cannabis such as analgesia and euphoria or if it is related to anti-inflammatory effects demonstrated in recent studies and experimental animal models (Hasenoehrl 2016; Klein 2006; Singh 2012).”

Both articles caution that we need more serious and long-term study on human subjects. But, they do not deny the relief of symptoms in at least the mile and moderate cases of Crohn’s disease.

Recent articles say cannabis can defeat Crohn’s Disease or lead to its remission. But, these are based on a 2013 study that more current research has put in some perspective. And, it’s just plain wrong to mislead patients who may have a lifetime of suffering.

Cannabis is known to have a modulating effect on smooth muscle tissue and involuntary spasms. Patients will find these properties in the following strains of cannabis if you smoke:

Crohn’s Disease patients need to know they have options.

Cannabis marijuana strains have anti-inflammatory and anti-spasmatic properties in addition to its ability to create uplifting effects that distract from the suffering. But, for those who don’t wish to smoke, there are a wide variety of edibles, oils, and other remedies.

Perhaps, the clinching argument for using cannabis for Crohn’s Disease is the lack of negative side-effects. Compared to those that follow the use of prescription medications, cannabis remains the gold standard for self-medicating Crohn’s Disease.