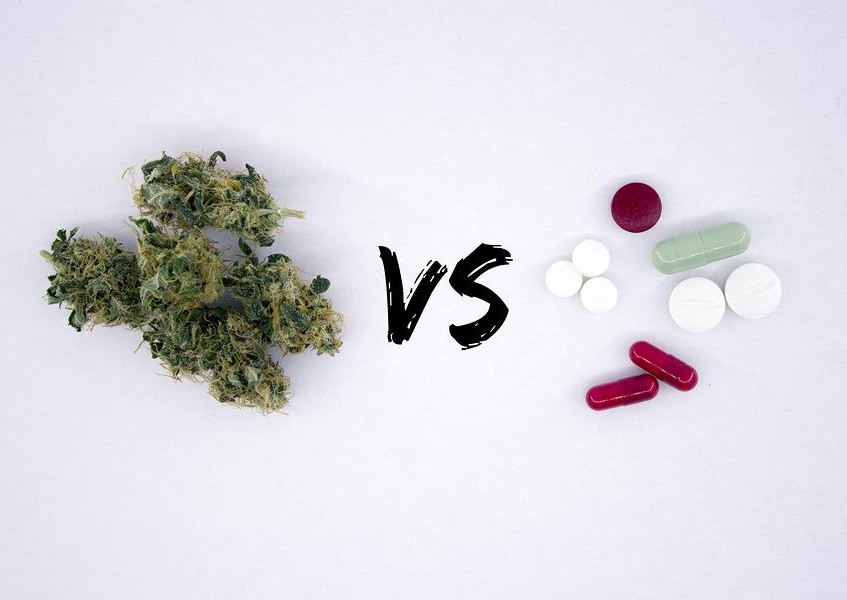 Cannabis can have a negative interaction with your pharmaceuticals although it presents much less threat than other stimulants.

Cannabis indica and Cannabis sativa are the most prominent species of cannabis. Analytic chemists study the species’ respective profiles as more important than their respective strains.

As a poly-pharmaceutical herb, cannabis has 108 cannabinoids including the prominent THC and CBD. Terpenes are the aromatic compounds, and at least 420 constituents make up the chemistry.

So, it’s worth considering if and how cannabis produces negative interactions with your pharmaceuticals.

Cannabis is absolutely contraindicated for people suffering from acute psychosis or severely unstable psychiatric problems. It is prohibited for those already suffering severe cardiovascular, liver, or kidney disease. And, cannabis use may aggravate existing arrhythmias.

There are simply too many combinations of medications and permutations of chemicals involved to cover here. But, we do want to cover some well-known issues.

Negative interactions with your pharmaceuticals

♦  THC is metabolized by CYP269 and CYP3A4.3. CYP2C9 breaks down (metabolizes) compounds including steroid hormones and fatty acids. CYP3A4 oxidizes small foreign organic molecules, such as toxins or drugs, so that they can be removed from the body.

There have been no studies on how CYP269 inhibitors eliminate THC. But, science says it would be expected that CYP269 inhibitors—amiodarone, cimetidine, cotrimoxazole, metronidazole, fluoxetine, fluvoxamine, fluconazole, and voriconazole—would inhibit THD elimination.

CYP3A4 inhibitors, including ketoconazole, clarithromycin, erythromycin, cyclosporine, verapamil, itraconazole, voriconazole, and boceprevir, would be expected to produce increase the concentration of THC by 1.20 and 1.8- fold.

What does this mean to you as a cannabis user?

You would need to know all the ingredients in your prescription pharmaceutical, the proportion of their presence, their respective mechanism of action, and more to make prudent decisions.

♦  A study of Self Reports of the Interaction between Substance Abuse and Schizophrenia published in the Australian & New Zealand Journal of Psychiatry found “Only cannabis increased positive symptoms of schizophrenia and only amphetamines reduced negative ones.”

♦  The Pharmaceutical Journal reports, “Cannabinoids are highly protein bound (up to 97 percent) and release of both THC and CBD from fatty tissue is slow, sometimes taking up to a month in heavy users.” This metabolism creates some potential for pharmacokinetic interactions.

More than this, we don’t know for sure because there is so little valid research in long-term focused human studies. Even permitting research, it would be hard to find a place to start. You would have to study each dose of each strain in combination with each pharmaceutical in diverse circumstances.

But, some things seem clear given what we know now.

Does cannabis have negative interactions with your pharmaceuticals?

Once you set aside the clear counterindications covered above, you must surrender readily to common sense.

Any fool can see that cannabis used in combination with alcohol, meth, heroin, cocaine, hallucinogenics, and other inebriants and stimulants will exacerbate the effects of the cannabis in body and mind experiences. Forget the warnings about operating heavy equipment. You’re making a mistake!

Otherwise, the research does not support any concerns you cannot manage at this time. The sedative effects attributed to CBD will clearly increase the sedation in antidepressants, anti-inflammatories, and SSRIs.

THC will increase blood pressure and heartbeat. When used in combination with blood-pressure medications, blood thinners, and beta blockers, the THC potency will risk bleeding and blood makeup.

Users must exercise prudence in the selection of strain, dosing, and frequency. If you have a known and serious medical condition, you should be cautious about cannabis use in general. If you are treating with pharmaceuticals, you should research the potential for counter-indications. And, where you have any doubt, you must confer with your prescribing doctor or medical cannabis doctor.

The pharmaceuticals mentioned here are among the most valued and successful pharmaceuticals. Many of them have not been marketed long enough to be subject to long-term study. And, few pharm leaders are promoting research on the interaction of cannabis and pharmaceuticals.

It’s left to your common sense and some trial and error to get it right, so long as you stay heads up!