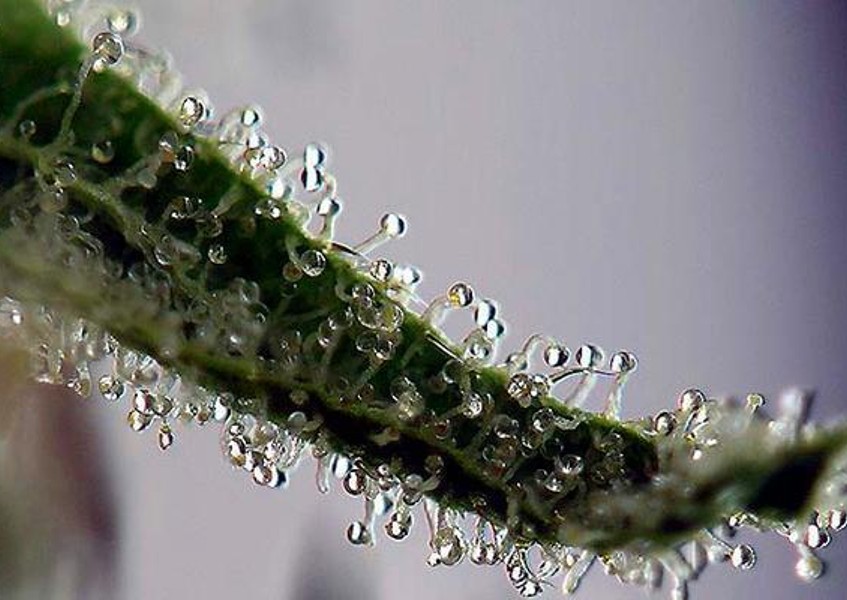 Terpenes are organic compounds produced by cannabis plants in most cases to defend against herbivores. They also serve as semiochemicals and communicate with other plants and animals to this end. Terpenese constitute between 5 and 10 percent of the total oils produced by the trichrome glands in the cannabis plant. Though constantly produced, they are easily vaporized in the morning and throughout the day by heat, which helps in determining ideal harvest times throughout the day.

Depending on how the cannabis is grown (soils, fertilizers, etc.), different strains or a given strain can produce different profiles. In addition to making marijuana smell the way it does, these compounds can have mild physical effects and are partly responsible for the subjective effects experienced by different strains on marijuana.

A terpene found in many plants, including marijuana, its scent is often described as woodsy and and spicy. It is notable for having a cyclobutane ring, which is a rarity in nature. This terpene has pain-relieving and anti-inflammatory properties as do many of the other terpenes on this list.

Is a bicyclic organic compound and a terpene. One historic name for borneol is borneo camphor which helps explain the name. It has calming effects and relieves stress and is known to repel insects. It is heavily used in traditional, homeopathic medicine.

A bicyclic monterpene which occurs naturally as a constituent of ofturpentine, with a content as high as 42% depending on the source. Carene has a sweet and pungent odor. It is not soluble in water, but miscible with fats and oils. This terpene is part of the cause of cottonmouth and red eyes. It is used to cure runny eyes and slow menstrual flow amongst other uses.

A colorless, liquid terpene that gives off a minty aroma amongst others. It is known to increase circulation and as a pain reliever.

A naturally occurring moncyclic sesquiterpene, it is found in hops (from which beer is made and its name is derived) and also cannabis. Well-known for its pain relief and other properties.

Limonene is a cyclic terpene with a strong smell of oranges or other citrus. It can relieve stress, elevate mood and has anti-fungal, anti-carcinogenic and anti-bacterial properties. It is used to help ointments penetrate the skin in medicines.

Is a naturally-occurring terpene alcohol chemical found in many spice and flowering plants including cannabis. More than 200 species of plants produce linalool. It's another terpene with sedating effects; it promotes relaxation and can be used for anti-convulsing, anti-anxiety, anti-depressant and anti-acne treatments.

More precisely classified as a monoterpene, it is a dimer of a isoprenoid precursor, and one of the most important. It is a component of the essential oil of several plants including bay, cannabis, ylang-ylang, wild thyme, parsley, and hops. Also famous for its sedative effects, it is an antioxidant and also an anti-inflammatory.

A common cannabis flavor is the natural tastes of pine needles, which comes from the pinene terpene. This terpene keeps people alert and can be used as an expectorant, topical antiseptic and bronchodilator

This terpene is a major constituent of many essential oils in plants. It has a floral, lime and citrus aroma although it is used in all types of fragrances. It gives off sedative, couch-lock effects.

The terpenes in cannabis have given the plant enduring, evolutionary effects. In the future, when marijuana is legal nationwide, it may be possible to access strain-specific cannabis oils, as well as made-to-order marijuana extracs with a full array of terpenes artfully tailored to meet the needs and desires of individual users.