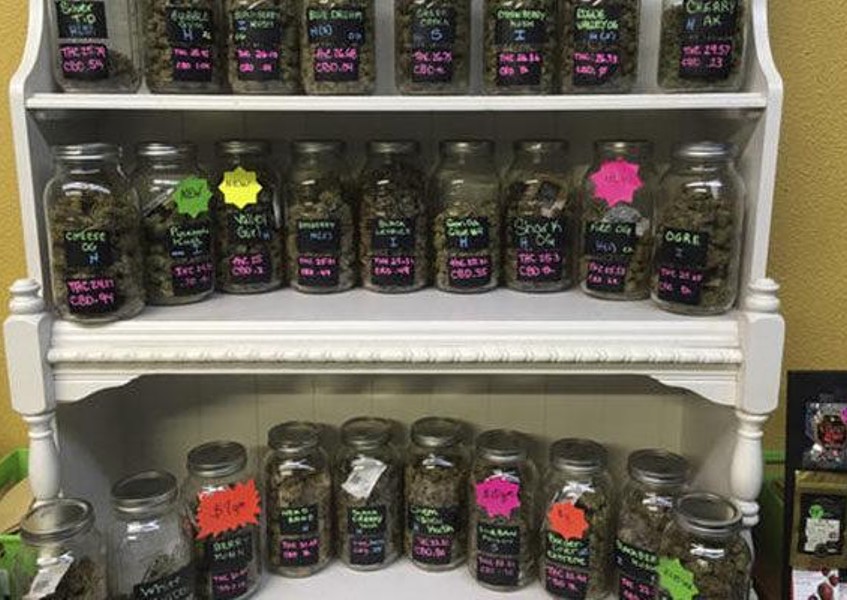 In this Sept. 27, 2016 photo, different strains of marijuana are displayed in West Salem Cannabis, a marijuana shop in Salem, Ore. / AP PhotoAndrew Selsky

SALEM, Ore. (AP) Just a few yards from the Salem city line, a customer strolled into the Herbal Remedies cannabis shop on Wednesday, and put his nose into two jars with pot strains on promotion: Black Licorice and Berry Funk. He drew in the aroma appreciatively, like a wine connoisseur savoring the smell of a fine cabernet sauvignon.

On shelves were other brands, such as Obama Kush, Space Candy and Blueberry Northern Light.

The shop, though, seems to be doomed at least for recreational sales.

It is in one of three dozen locales in Oregon where voters on Tuesday prohibited marijuana businesses, according to a list compiled by Rob Bovett, legal counsel for the of Association of Oregon Counties. Voters in another two dozen towns and counties decided to allow these businesses.

Two years after Oregon legalized recreational marijuana production, processing, sales and use, parts of the state are still sorting out whether to allow it in their own backyards.

For Herbal Remedies owner Jered Decamp, the shop is on the wrong side of the Salem city line. On the west side of Lancaster Avenue lies the city, where marijuana businesses are allowed. His store is across the street on the avenues east side, in an unincorporated part of the county where the ban now applies.

I feel horrible, Decamp said in a telephone interview. He believes he should allowed to at least keep the medical marijuana side of his business open. Marion County voters didnt just say no to recreational marijuana. By a 1 percent margin, they also prohibited medical marijuana, according to the secretary of states office. But county official Joe Fennimore said Herbal remedies will probably till be able to sell medical, being grandfathered in.

Decamp is trying to think of ways to get around the recreational ban which he said comprises the vast majority of his business and one remedy would be to try to convince city ...