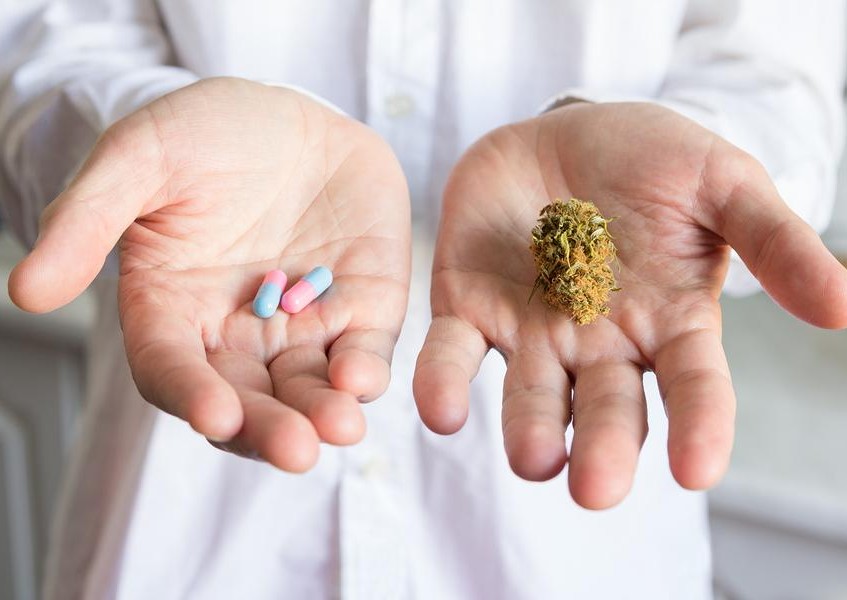 Aspirin has been around a long time. Not nearly so long as cannabis, but people have been treating with aspirin since the middle of the 19th-century.

Aspirin or acetylsalicylic acid (ASA) is derived from willow extract, a folk remedy dating to ancient Egypt. Available under scores of brand names, aspirin is as the go-to over-the-counter solution for mild headaches, aches, pains.

Considering that some cannabis strains and CBD-derivatives treat the same problems, you might wonder if cannabis offers better pain relief than aspirin.

Parents and doctors have recommended aspirin for generations to treat fever, common cold symptoms, head- and toothaches, arthritis inflammation, and more. Labeled as a salicylate or NSAID (non-steroidal anti-inflammatory drug), aspirin is part of every emergency kit and on everyone’s medicine cabinet.

Popular brand names include Acuprin®, Anacin®, Bayer®, Bufferin®, Ecotrin®, and more. Each is marketed as if it were unique and superior to the others. But, the formulation and mechanism of action are the same.

♦ A daily 8mg aspirin may be prescribed to prevent a clot-related stroke, but aspirin may increase the risk of hemorrhagic stroke, that is, trigger a stroke caused by a burst blood vessel.

♦ Frequent aspirin intake increases the risk of gastrointestinal bleeding. Patients suffering from bleeding ulcers or irritated gastrointestinal problems are discouraged from using aspirin. Coated aspirin may reduce the risk, but the coating will also slow the mechanism of action.

♦ Some people are allergic to aspirin. It produces flushing, hives, runny nose and asthma within an hour of taking a tablet. But, according to Allergy.com, “If you have hives (urticaria), nasal polyps or asthma, your risk of aspirin allergy is 10-30% compared to 1% in people without these conditions.”

So, aspirin has a continuing role in your medical regimen with a significant heads-up regarding side effects and counter interactions.

Marie Woolf, a contributor to The Independent, quotes Oxford scholar Dr. Leslie Iverson, “Cannabis is a safer drug than aspirin and can be used long-term without serious side effects.” Writing for Medium, Dr. Frank D’Ambrosio quotes 1997 FDA statistics that list overdoses and deaths due to OTC anti-inflammatory. The numbers are too old to quote, but D’Ambrosio also notes, “there may be some euphoria associated with using cannabis for pain or inflammation, but the chances of overdosing and dying on cannabis are even lower than many everyday drugs that we do not even think twice about consuming!”

CBD does not bind to the receptors, but it runs interference on other antagonists that can affect health. Spherically, CBD reduces the natural reabsorption of anandamide, known as “the bliss molecule.”

♦ Buprenorphine and other sedatives

♦ Beta blockers and other heart treatments

♦ Benzodiazepines including Ativan, Klonopin, and Xanax

Cannabis offers better pain relief than aspirin — without the concerns.

Cannabis has many confirmed and scientifically supported medical benefits. These include treatment for pain attached to inflammation, migraines, arthritic conditions, and auto-immune syndromes.

A shortlist of the most beneficial strains includes:

And, a closing piece of advice, cannabis use offers euphoria, clarity, and focus as well as pain relief and restorative rest.